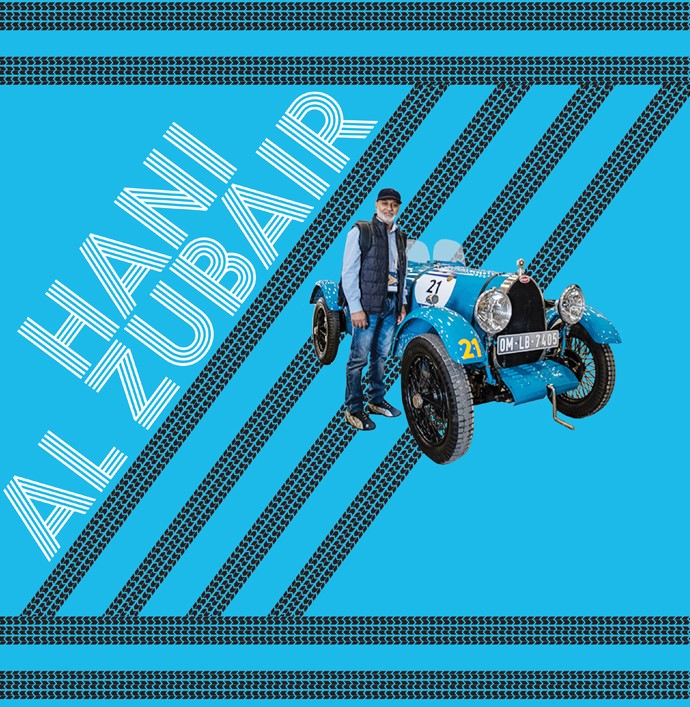 Hani Al Zubair, the first Omani to participate in a famous international classic car rally, was among the triumphant racers who made it across the finish line.
The veteran go-karting racer competed in his 1925 Bugatti Type 23 in the prestigious 1000 Miglia Motorsport endurance race across Italy in May 2019, covering a distance of 1000 miles over four days. 430 classic car drivers from across the world took part in the race, with only 360 finishing.
“The experience I had there is unforgettable. The atmosphere was incredible, every town and village we drove through you would see people lined up on the road cheering and waving at you, people on the streets would ask questions about the car; the whole country was involved. We had the privilege of driving through historical sites that are usually closed for vehicle access and so much more. I can’t wait to do it all again.” Al Zubair, Chairman of the Zubair Automotive Group, said.
“If you look at it you may think that it is easy. The actual average speed is around 40 km/h. You are going through little towns and villages, and of course, at every junction and roundabout there are hundreds of people on the side of the road cheering and taking pictures and enjoying the beauty of seeing classic cars go by. And you have a good mix in the audience as well. There are older people who have known these cars during their lifetime and then there are kids and grand-kids seeing the cars for the first time.”
“It wasn’t difficult for me to switch from right-hand driving to left because I have lived in the UK for a long time, so I am used to it. But this car had a lot more challenges because of two main factors: the race was in Italy where they drive on the right and both the steering wheel and gear stick in this car are on the right, so it felt strange and there isn’t a lot of room. It is such a small car that the hand brake is actually on the outside. The second factor was that the accelerator is on the left and the brake pedal is on the right, so I had to be very diligent not to get the two mixed up!”
“I am very proud to be the first Omani to compete in this event. Was it a smooth journey with no breakdowns, though? Absolutely not. There were times when I thought I wouldn’t be able to make it to the finish line and my race was over. But each problem was expertly overcome with the help of my incredible support team and co-driver, and we made it to the end. This was my main goal as it’s the first time the car has been driven for over 12 years, and it is almost 95 years old!” Al Zubair said.
The race began in Brescia, heading south-east to the coastal town of Cervia Milano Marittima. It then travelled south west across the country, to the beautiful Italian capital of Rome before making its way back north towards the finish line in Brescia, with a stop at the picturesque city of Bologna along the way.
“ When the Bugatti first came to Muscat, we were trying to get the 1000 Miglia to come to Oman (for the Middle East), but they had some changes within their management and it unfortunately didn’t happen. We even sent people from the automotive industry to see how they do things, to follow the event and see what happens. At a future date, we may try to approach them again, but we need to see how much interest it attracts,”he said.
“The car was first brought to Oman in 2004, and soon after, it was sent to Gentry Restorations in the United Kingdom where it was fully restored to its former beauty in 2006. It has been on display in the Car Museum at the Shangri La Barr Al Jissah Resort ever since. It was there that a 1000 Miglia representative who happened to be staying at the hotel saw the car and asked why is this car sitting in the museum? This should be used and be part of the Mille Miglia, and things just took off from there,” Al Zubair said.
He added: “We thought this would be a first step to see if we can make it. Actually, getting through the race shows that what we had was a good vehicle. You need to understand the car has over 95 per cent original parts, which is quite difficult for a 1925 car.”
““Life throws you curve balls sometimes. There are so many things people want to do but always talk about shortage of time and, because you are running after so many things, unless you make a specific commitment, you never do it. And I suppose, this was a final push for me, and I am so glad I finally did it.”[email protected]