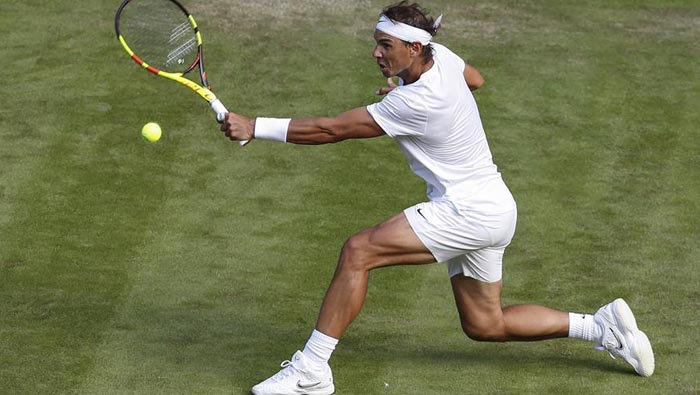 London: There were few surprises in the first round of men's singles action at Wimbledon as Roger Federer and Rafael Nadal eased into round two.

No. 2 seed Federer lost his first set to competition debutant Lloyd Harris of South Africa, but the eight-time Wimbledon champion rallied and ultimately saw off his opponent 3-6, 6-1, 6-2, 6-2.

"With my experience I stayed calm. I know I have other things in the bag that I can come up with, other tricks. I just took a bit of time," the 38-year-old said.

"Federer was always my idol. He was beautiful with finesse and the best role model for players," Harris noted. Nadal swept unseeded Japanese Yuichi Sugita 6-3, 6-1, 6-3. "I am happy for the victory, that's the main thing," the Spaniard said.

"It's the first official match on grass for a year so it's always difficult. At the beginning it was tough, not the ideal start, but then things changed quickly," the 33-year-old added. In the women's singles, 2004 Wimbledon champion Maria Sharapova retired from her first round match against Pauline Parmentier of France with a wrist injury.

Sharapova had served for the match while leading 5-3 in the second, but the 32-year-old suffered a setback and called for a medical timeout after losing the set. Things didn't improve for Sharapova, however, and the Russian retired hurt while trailing 5-0 in the third set.
China's Wang Qiang and Wang Yafan both won their women's singles first round matches, but Zheng Saisai lost to No. 1 seed Ashleigh Barty of Australia 6-4, 6-2.

Elsewhere, the U.S.'s Alison Riske made a small piece of Wimbledon history, defeating Donna Vekic of Croatia to become the first player to win a match under the new roof on No. 1 Court.