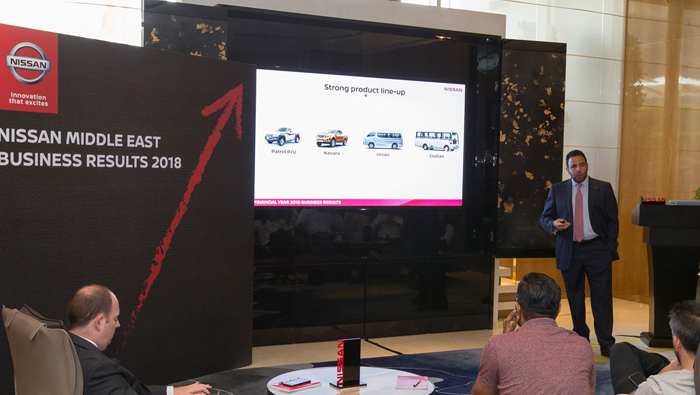 Muscat: Nissan on Wednesday announced its fiscal year 2018 (FY18) business results in the Middle East, recording a highly successful performance across the region. Nissan’s market share in the Gulf reached a record high of 16.9 per cent, a gain of2.9 points over the last two years. Nissan also witnessed strong growth momentum across the wider Middle East 1 region, with its overall market share standing at a healthy 15.7 per cent.
Nissan continued to strengthen its performance in the region with a firm commitment to customer satisfaction and service, as well as the brand’s ongoing efforts to drive customer ‘delight’ experiences with targeted and customised offerings. The result was key models topping their segments as the Middle East’s favourite cars.
The Nissan Patrol range continued its segment domination in the UAE with a 45.2 per cent market share. It has retained its position as a majority contributor to Nissan Patrol’s global sales.
Regional icon the Nissan Patrol Safari also saw a steady growth in annual sales with an increase of 28.4 per cent thanks to the introduction of exciting new variants like the Nissan Patrol Gazelle and Falcon.
The Nissan Sunny maintained its segment leadership with a 58 per cent growth in sales and 52.1 per cent market share.
The Nissan Kicks’ dual-tone variant launch accelerated the car’s upward trajectory to a 32.4 per cent market share, also ranking first in its segment.
“Recognising the dynamic nature of the industry, Nissan remains committed to bringing innovation and excitement to all our customers in the Middle East. Our strong, growth in FY18 is a testament to this commitment. Over the past year, we have maintained operational excellence across our product line-up, while finding new ways to connect and engage with our customers, which has led to our record-breaking market share,” said Thierry Sabbagh, Managing Director Nissan Middle East.
Performance across regional markets wasfurther spurred by innovative launch campaigns, including the Middle East debut of the GT-R50 by Italdesign, a collaboration between Nissan and Italdesign that reimagined Nissan’s GT-R as a custom-bodied, ultra-limited supercar. FY18 also saw the all-new Nissan Altima launched in the Middle East. The Nissan Altima plays a key role in the region, being one of the most important nameplates with over 27,000 units of the previous 5th Generation of the Nissan Altima sold across the region over the last five years.
Other major milestones for Nissan in FY18 were industry recognition with the ‘B&W Report Client of the Year’ Award, as well as several other awards at Dubai Lynx. Along with ‘Advertiser of the Year’, Nissan also took home three Grand Prix, eight Silver, and four Bronze awards for various campaigns, including CamelPower. The CamelPower campaign was an innovative idea that helped Nissan own the conversation around performance of cars and off-road vehicles on sand.
Nissan Middle East also gained global appreciation for breaking the Guinness World Records title for ‘Largest Synchronised Car Dance’. With 180 Nissan Patrols driving in the shape of a dancing falcon.
Joni Paiva, Regional Vice President, Marketing and Sales, Nissan Africa, Middle East and India, said, "Entering into the second year of Nissan’s six-year midterm plan, Nissan M.O.V.E. to 2022, we are confident in meeting our commitment for Africa, the Middle East and India. This includes driving overall excellence throughout the GCC, accelerating brand power in key markets, and maintaining top-level customer service.” Katrina Kaif and Vicky Kaushal to have a grand wedding