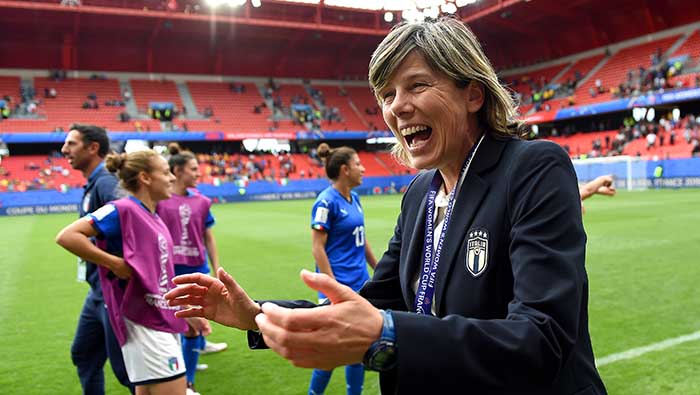 Valenciennes: Italy's head coach Milena Bertolini talked about her pride and pleasure for the team despite a 2-0 loss to the Netherlands in FIFA Women's World Cup quarterfinals here on Saturday.
"I didn't expect it to be such a great tournament. When we left Italy, I don't think that I expected to be in such a great run in the tournament until the last day of the competition," Bertolini told a press conference.
"I only started to think about the game after game. Clearly, we are a bit sad this evening. However, we are proud and pleased to put on a good run here in the World Cup," she added.
For Bertolini, the opening 45 minutes was a fairly even context from a technical perspective, and her players were able to set the team up. But they were a bit tired after the break from a physical perspective.
"We did have a few chances. Clearly, when you are involved in a quarterfinal against such a strong opponent as the Netherlands, you need to make the most of one or two chances to score because you won't have so many chances during the course.
"After the break, we faded. I saw the team was tired in the dressing room. We started to struggle with several players feeling tired within the context of the match.
"It was a shame and disappointed that we conceded from two set-pieces. When you get a little bit tired, you will lose a clear mind and make bad decisions," she pointed out.
On the other hand, Bertolini thought that her girls should be happy.
"Because they allow the Italian public to fall in love with the game. Women's game has been appreciated and discovered by a lot of people back home. It should be a starting point now to go forward in the coming years."
Many Italian players burst into tears following their agonising loss, meaning they squandered the chance of bettering the previous record at the World Cup.
"Tears are there, and that's understandable. But nothing is over. I really think it needs to be a starting point, and we need to push on from this with a lot more confidence," Bertolini noted.