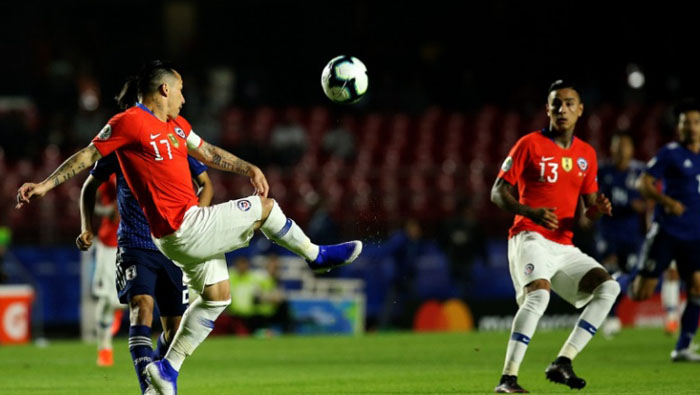 Bologna midfielder Erick Pulgar and Manchester United's Alexis Sanchez were also on target at Morumbi stadium in Sao Paulo as Chile moved level with Uruguay at the top of Group B.

Vargas, who entered the match tied with compatriot Enrique Hormazabal for most Copa America goals, is now Chile's highest scorer in the competition and equal tenth overall alongside Uruguay's Angel Romano.

The scoreline did not do justice to a Japan side that looked threatening for long periods but failed to find a cutting edge in the final third.

Chile, who won the tournament in 2015 and 2016, will be guaranteed of a berth in the knockout phase here if they beat Ecuador in Salvador on Friday.

Pulgar opened the scoring against the run of play with a towering header after a Charles Aranguiz corner.
Japan arguably had the better of the first half chances and were unlucky not go ahead as 20-year-old Ayase Ueda created problems for the Chile defence.

Vargas made it 2-0 just after half-time when his long-range shot took a deflection and flew into the top-right corner.
Aranguiz then provided his second assist of the night, pulling back a cross from the right which Sanchez sent crashing into the net with a close-range header.