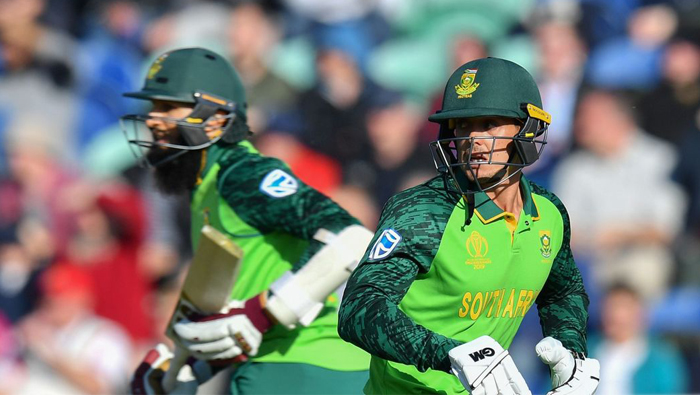 Manchester: South Africa, who registered their first win of the ICC Men's Cricket World Cup by defeating Afghanistan by nine wickets, will face a much stiffer challenge when they take on New Zealand at Edgbaston on Wednesday.

It was Grant Elliot's famous "hit into the grandstand" in an enthralling climax which ended South Africa's World Cup campaign in 2015 and powered New Zealand to their first ever appearance at the finals. While stakes might not be as high for New Zealand when they take the field on Wednesday, for South Africa, the result would determine their contention for the race to the semi-finals.

New Zealand started their World Cup campaign with three consecutive wins before their fixture against India ended in a wash-out at Trent Bridge. The bowlers have been in prime form, having restricted the opposition to a below-par total on each occasion, making things easier for the batsmen. The middle-order, which failed considerably against Bangladesh before Mitchell Santner finished the job, will be put to a stiff test against South Africa.

South Africa, destabilized after three consecutive defeats, put on a complete performance to register a nine-wicket win over Afghanistan in their last game.

While Imran Tahir produced another match-winning spell as he picked up four wickets, the century-stand put on by the openers was probably the greatest positive for the Proteas. The top-order will have to shoulder responsibility yet again, as they will be up against an in-form New Zealand bowling unit.

Lungi Ngidi, who has been declared match fit after he missed last three games due to hamstring injury, is likely to replace Beuran Hendricks in the playing XI.

Key Players
Kane Williamson (New Zealand): The skipper has been in prime form, scoring 40 and 79* in his last two innings after aggregating 152 runs in the two warm-up games. Williamson, who scored a century in his last outing at Edgbaston, will once again look to play a long innings.

Kagiso Rabada (South Africa): The 24-year-old has been a strike bowler for South Africa for the last few years, leading the pace battery in the absence of Dale Steyn. Rabada, who averages 19.82 with the ball against New Zealand, will look to produce a match-winning spell in this all-important game.

Conditions
It will be a cloudy start to the day with chances of some light rain showers. However, it should become increasingly dry and bright as the day wears on. Teams batting first have won three of the last four completed games at Edgbaston.