Shakib and Liton drive Bangladesh to victory over West Indies 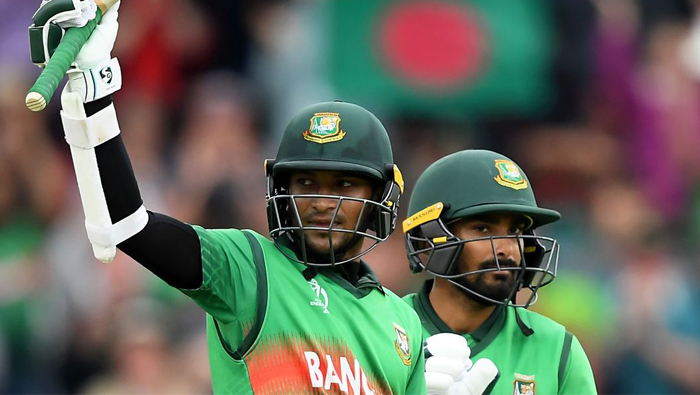 Shakib struck his second century of CWC19, finishing unbeaten on 124 off 99 balls, while Liton Das almost had time to bring up a hundred of his own, smashing a scintillating 94* off 69 balls.

The pair guided Bangladesh to a memorable victory in front of a vocal crowd of fans, sparking joyous scenes when the match-winning boundary was pulled through square leg by Liton. That shot was emblematic of the chase, in which West Indies’ accustomed short-ball strategy was summarily dismantled by the Bangladeshi batsmen.

Soumya Sarkar got the Tigers off to a flier with a 23-ball 29, while Tamim Iqbal’s 48 helped lay the platform. He and Mushfiqur Rahim fell in consecutive overs to give the Windies a sniff, but Liton and Shakib put any hopes of a comeback to bed.

West Indies would have been confident at the halfway stage, having made 321/8 on the back of half-centuries from Evin Lewis, Shai Hope and Shimron Hetmyer. The former helped make up for a slow start, with Chris Gayle falling for a 13-ball duck, cruising to a 67-ball 70, while Hope played the anchor role, falling four short of a maiden World Cup hundred when he holed out to Liton of Mustafizur Rahman.

That was the last of three wickets for Mustafizur, who helped curb the West Indies’ acceleration. He also dismissed Hetmyer, who had brought up the joint-fastest fifty of CWC19 off just 25 balls, and Jason Holder, who bludgeoned a 15-ball 33. Darren Bravo also struck two sixes as West Indies, the 10th and 11th of West Indies’ innings, which included the two biggest hits of the tournament so far.

But in the end, the day belonged to a man who hit not a single maximum, Shakib, in the form of his life and producing the returns to show it.