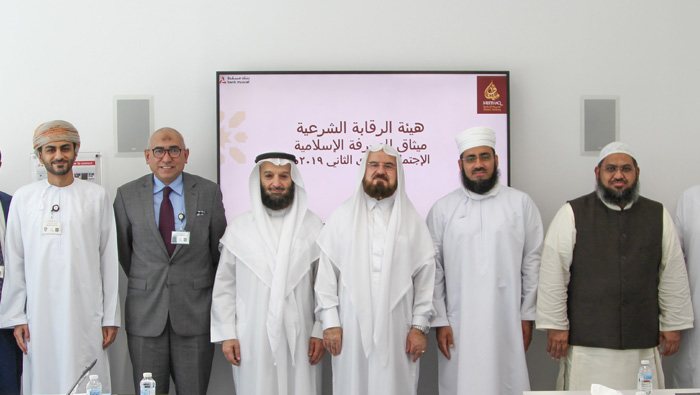 Muscat: The Board of Directors of Bank Muscat and the Meethaq Sharia Supervisory Board led by their respective chairmen — Sheikh Khalid bin Mustahail Al Mashani and Sheikh Dr Ali Qaradaghi — held a meeting to review the performance of Meethaq Islamic Banking, tools of Sharia control and the framework of the assessment of legal obligation. The meeting, which was held at Bank Muscat Head Office, also discussed steps to strengthen the regulatory capital requirements and diversification of investment portfolios.
Soon after the meeting of the two boards, the Meethaq Sharia Supervisory Board led by Sheikh Dr Ali Qaradaghi, Chairman, also held its second meeting of 2019 at the Bank Muscat Head Office, which was attended by the board members and senior officials. The board reviewed the performance of Meethaq during the current financial year and also discussed a number of new products and audit results on Meethaq assets, Sukuk and the dividend distribution mechanism. The board also reviewed the Sharia Compliance of Meethaq products as well as the educational and awareness activities being conducted.
Meethaq is focused on becoming the benchmark for Islamic banking and finance in Oman and the region. The Meethaq Sharia Supervisory Board discussed many important topics to consolidate the leading position of Meethaq. Meethaq has further consolidated its leadership position and has recorded many achievements contributing to the growth and development of the Sultanate’s economy.
Following the runaway success of its initial Sukuk issuance in 2017, the second series of Meethaq Sukuk in May 2019 evoked a similar overwhelming response from individual and institutional investors following which Capital Market Authority's allowed Meethaq to exercise the greenshoe option and increase the offer size of Second Series from OMR25 million to OMR45.59 million. The public offer was open to all Omani and non-Omani individuals as well as institutional investors from April 29, 2019 to May 15, 2019. The issue has an indicative profit rate of 5.5 per cent per annum with a tenure of five years. All successful applicants received 100 per cent allocation in their investor accounts with Muscat Clearing Depository Company (MCD) following which the Sukuk was listed on the Muscat Securities Market (MSM).
Meethaq has adopted global best practices in Islamic banking and finance to create a robust model which protects its customers in the Sultanate and complements the Islamic banking industry. Every Meethaq product goes through the process of Sharia compliance certification by the Sharia Supervisory Board and is created in line with the guidelines of the Central Bank of Oman.
Meethaq has also launched various initiatives to support SME development in Oman. Meethaq’s commitment to fostering national talent and providing support for SMEs is aimed at creating meaningful employment opportunities. Meethaq recognises that the role of SMEs is highly important and remains committed to working hand-in-hand with the government and partners to create a favorable environment for SMEs in Oman.