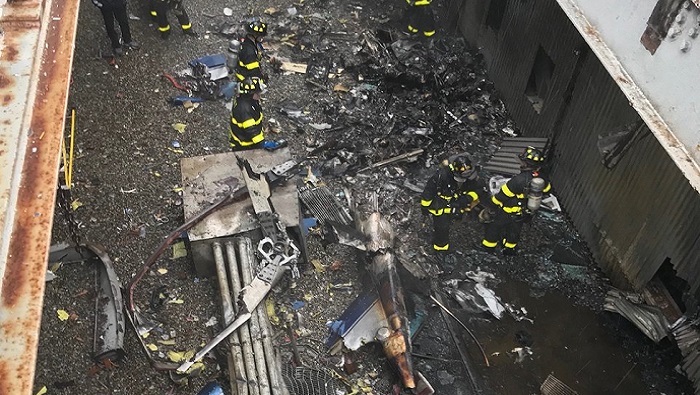 Speaking to members of the press, New York City Mayor Bill de Blasio said: "There is no indication at this time that this was an act of terror and there is no ongoing threat to New York City based on all of the information we have right now.

"One person died in this helicopter crash. That person is presumed to be the pilot, but we are still waiting for absolute confirmation of that fact. There does not appear to have been any passenger in the helicopter."

"There were no other injuries that we know of at this point in time to anyone in the building or on the ground. This could have been a much worse incident. And thank God no other people were injured in this absolutely shocking, stunning incident," he added.

Speaking about the incident, New York City Fire Department (FDNY) Lt Adrienne Walsh, whose unit was first-due on the scene of the crash, stated: "We went to the 51st floor and took stairs to the roof. We saw a debris field that was on fire, with the fire contained to the roof. Unfortunately there was one casualty."

FDNY Chief of Fire Operations Thomas Richardson added: “Whenever we have a fire on a high-rise office building – 54 stories is over 700 feet tall – we have challenges getting enough water pressure up to the higher levels of the building, but we have Standard Operating Procedures in place. We have fire engines that connect to the stand pipe system and supply pressure. We also use the manual fire pumps in the building to increase the pressure.

"We arrived on the scene within five minutes, and most of the fire was extinguished within a half hour. FDNY operations have now concluded. We had 43 FDNY units on scene, and our members operated bravely and with efficiency.”

US President Donald Trump praised first responders in New York on Twitter, writing: I have been briefed on the helicopter crash in New York City. Phenomenal job by our GREAT First Responders who are currently on the scene. THANK YOU for all you do 24/7/365! The Trump Administration stands ready should you need anything at all."

The Federal Aviation Authority (FAA) identified the helicopter as an Agusta A109E. In a statement, the FAA said: "Preliminary information is that only the pilot was aboard. FAA air traffic controllers did not handle the flight. The NTSB (National Transport Safety Board) will be in charge of the investigation and will determine (the) probable cause of the accident."

NTSB investigators have issued a call for anyone who took photos or video of the crash to come forward as witnesses. Additionally, the board has sent an aviation safety investigator to look into the crash, the authority announced.