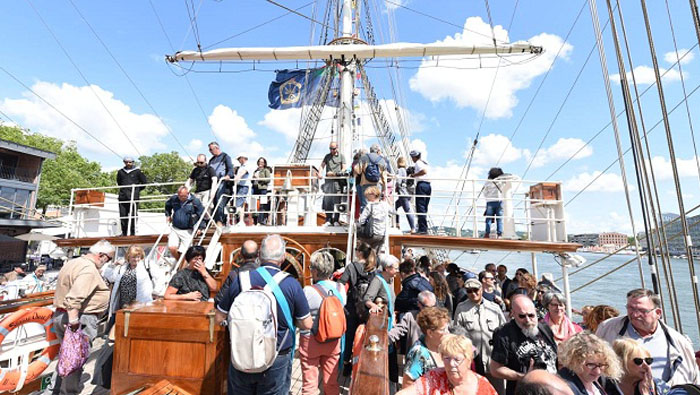 Paris: The Royal Navy of Oman’s vessel (RNOV) “Shabab Oman II” registered high rates of visitors during its current participation at the Armada Maritime Festival in the French city of Rouen, which lasts until 16 June.
The participation is considered the fourth journey in the vessel’s history, which is themed (Masts of Glory and Peace) to the European continent, which began 15 April and lasts until 17 October 2019.
During the journey, the vessel will visit 20 ports and cities in Asia, Africa and Europe, during which the vessel will anchor in four main stations, starting from its current (first stop) in Armada Maritime Festival, and then the ship moves to its second station to take part in the Liberty Tall Ships Regatta - Scheveningen in the Netherlands during 20 to 23 June.
The vessel will then compete in its third stop in Tall Ships Regatta during 3 to 6 July in Aalborg in Denmark.
Then, the vessel will take part in the Tall Ships Regatta in Aarhus city in Denmark, during 1 to 4 August. The visitors toured various facilities at Shabab Oman II.