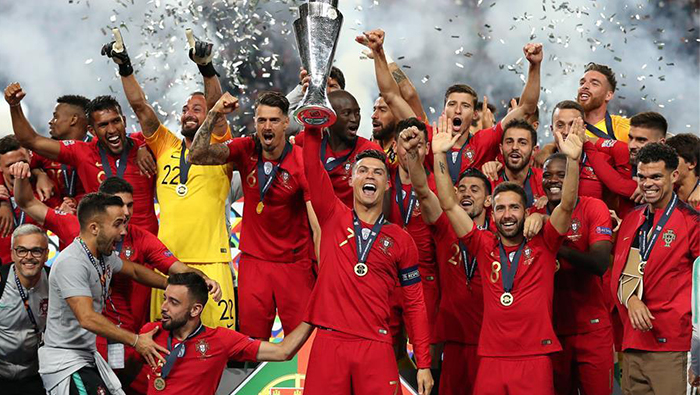 Porto: Portugal beat Netherlands 1-0 to win the inaugural UEFA Nations League at the Estadio do Dragao here on Sunday.
Fernando Santos' men, who won the 2016 European Championship in France, dominated the match but waited until the 60th minute to score the winning goal through Goncalo Guedes.
Captain Cristiano Ronaldo, who scored a hat trick in their 3-1 semifinal victory over Switzerland three days ago, headed a corner straight at the Dutch goalkeeper Jasper Cillessen early in the second half. The 34-year-old then shook off two Dutch defenders to drive from the edge of the box, which was well saved by Cillessen.
Portugal took the lead as Bernardo Silva's reverse pass to find Guedes, whose powerful right-footed strike proved too powerful for Cillessen.
The Dutch had their best chance in the 64th minute but Memphis Depay's header was saved by Portuguese keeper Rui Patricio.
Santos, who took over as the Portugal coach in 2004, said after the match, "For the last five years, we have been an almost indestructible family who know what we are capable of doing. We knew we could win this match."
Despite the defeat, the Netherlands have proved that they have regained revival after the failures to qualify for the 2014 European Championship and 2018 World Cup.
Dutch head coach Ronald Koeman said, "Even if you have not won the match, you have taken the experience with you for the next time. We have made big steps in the past year. That's really postive."
Koeman, whose men had only 4 shots against 17 from the hosts, added, "We need more time and more offensive strength. We should create more chances. That is what we lack tonight."
Earlier in the afternoon, England beat Switzerland 6-5 on penalties to finish third.
Everton's goalkeeper Jordan Pickford saved from Josip Drmic to seal the win after the first 11 penalties in the shootout were scored.

Ronaldo wins top scorer trophy
Cristiano Ronaldo, who scored a hat-trick in Portugal's 3-1 victory over Switzerland in the semifinals, won the Alipay Top Scorer Trophy at the UEFA Nations League Finals here on Sunday.
Ronaldo is presented the tropy by Eric Jing, CEO of Ant Financial Services Group, the operator of Alipay, at the Estadio do Dragao in Porto after Portugal's final victory over the Netherlands.
Ronaldo's teammate Goncalo Guedes, who scored the winner in the final, won the silver trophy while England striker Marcus Rashford took the bronze one.
"Congratulations to Cristiano for adding the Alipay Top Scorer Trophy to his collection," Jing said. "We've been inspired by the passion for football and digital experiences that we've seen over the past week in Portugal. We look forward to promoting further integration between football and technology in our partnership with UEFA, bringing more fun, energy and inclusion to the game."
In November 2018, Alipay became UEFA's sponsor for the men's national team events, including UEFA EURO 2020, UEFA EURO 2024, the European Qualifiers and the UEFA Nations League Finals.