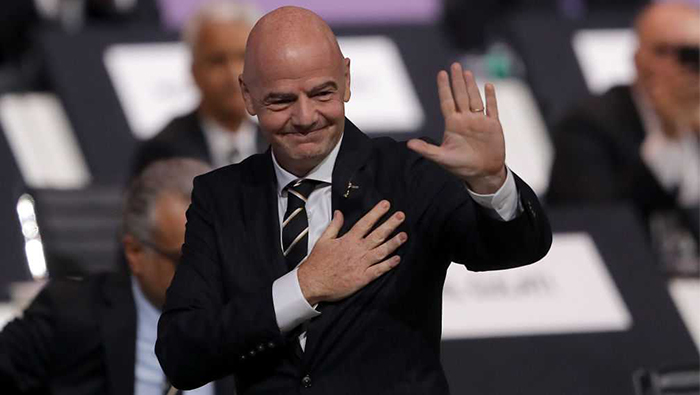 Paris: Gianni Infantino launched into a new four-year term as FIFA president after one of the most rigidly-controlled and perfectly stage-managed congresses of the world football federation’s modern era.
It was all over in two hours 45 minutes.
Apart from the formality of re-electing the 49-year-old Swiss lawyer by acclamation, the delegate from 211 FAs from all around the world were expected only to applaud at the scripted moments. Important decisions had all been taken by the executive bodies in the previous weeks. Nothing could be left to chance. No unscripted interventions permitted.
Three years and four months ago Infantino was elected to complete the original mandate of the banned and disgraced Sepp Blatter.
He promised more World Cup slots and more development funds and - as a rare politician who fulfilled his campaign promises - he reaped the reward from the grateful faithful.
If there were any doubters, the possibility of registering at least an abstention was discounted by a change of rules permitting the election of a candidate by acclamation - that is, a congress-wide round of applause.
Changing the rules did require a vote: by 202 to three against with six abstentions. So not everyone was quite on board - or maybe they pressed the wrong button.
Not that it made any difference. The overwhelming majority were happy to see Infantino back in power and he responded by reviewing all the achievements of his 'three years four months' and holding out the tantalising prospects of even more monies to come.
Infantino said, "The last three years four months have not been perfect - I have made mistakes and I try to do things better.'
But that was the last dying flicker of negativity."
He continued: "Today nobody talks about crisis. Nobody talks about rebuilding FIFA from scratch. Nobody talks about scandals and corruption. Now we talk about football. I think the very least we can say is that we have turned the situation around. In three years four months this organisation went from being toxic, almost criminal, to being what it should be - an organisation that develops football, an organisation that cares about football. We have transformed FIFA into a new FIFA, an organisation which is synonymous with credibility, trust, integrity, quality, human rights, social commitments, modernity, professionalism."
Critics of Infantino’s bullish style from both outside and inside may disagree but he sought to justify the hyperbole by pointing up greater transparency in terms of finance.
Infantino said,"Nowadays it is not possible to make hidden payments or to do something unethical with our money flow. We are all aware of where each dollar is coming from and going to. There is no more space for corruption at FIFA. We have a zero tolerance position. Our history must not be repeated. That must be clear to everybody inside and outside this room."
The figures were impressive considering the predictions of disaster which accompanied the arrests and indictments of more than 40 senior football officials - mostly in the Americas - at the height of the FIFAGate scandal which, indirectly, helped bring Infantino to power.
He said, "When I was elected president the budget was $5bn. But we didn’t generate $5bn in the last four-year cycle. Instead we generated $6.4bn when everyone was saying nobody will want to partner with FIFA. The reserves were $1bn. Now I am proud to announce that the reserves are $2.75bn. We did so while multiplying by four times the investment in football development. We are not spending it in dodgy deals but checking exactly what happens with this money because 100pc of the members are audited externally to make sure the money is going where it has to go - on pitches, schools, footballs, equipment, for boys and girls, for everyone."
The money has to come from somewhere. For better or worse this is the reason Infantino’s FIFA is expanding the World Cup from 32 to 48 teams and launching a 24-team Club World Cup in 2021 - probably in China though he did not say so.
Infantino took the credit for the introduction of VAR at the 'best organised World Cup in history (in Russia)', for setting up a woman’s football division which brought him back to reflecting on the imminent Women’s World Cup in France.
Just in case his listeners - outside the congress hall - had forgotten, he returned to promoting ‘New FIFA’ which 'means democracy, listening, working together, fighting any form of discrimination and for human rights.'
The delegates must have been happy. After all, they all applauded . . . and no-one stood against him.
Ironically Sheikh Salman bin Ebrahim al Khalifa, the Asian confederation supremo beaten to the top job in 2016, was the senior vice-president then charged with running the congress-floor formalities for Infantino’s coronation.