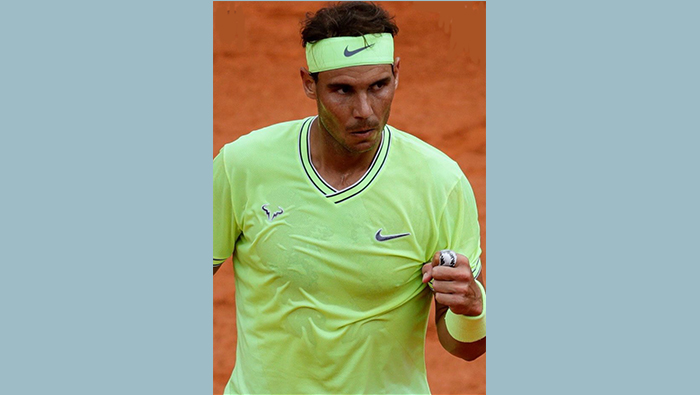 Paris: Rafael Nadal captured an historic 12th Roland Garros title and 18th Grand Slam crown on Sunday with a 6-3, 5-7, 6-1, 6-1 victory over Austria’s Dominic Thiem.
The 33-year-old Spaniard becomes the first player to win the same Slam 12 times after seeing off a challenge from a weary Thiem in a repeat of the 2018 final. Nadal is now just two behind Roger Federer’s all-time record of 20 majors and three ahead of Novak Djokovic who was knocked out by Thiem in the semi-finals.
Ashleigh Barty won her first Grand Slam singles title after easing past Marketa Vondrousova in straight sets in the women's final, while men's singles top seed Novak Djokovic saw his 26-match winning streak in Grand Slams snapped at the hands of fourth-seeded Dominic Thiem in full sets in semifinals here on Saturday.
In the penultimate day action, No. 8 seed Barty outclassed the Czech teenager Vondrousova 6-1, 6-3 in one hour and 10 minutes.
"It's been an incredible couple of weeks. Any time I can play my brand of tennis, I can match it against the best in the world," said Barty, who hit 27 winners compared with Vondrousova's 10.
"For the last fortnight, the stars have aligned for me. I have been able to play really good tennis when I've needed it. This is just incredible," added the Australian.
Djokovic had won three consecutive Grand Slam titles since last year's Wimbledon, but his hope of sweeping four majors at the same time was given a huge blow by the 25-year-old Thiem in a match suspended due to rain on Friday, when the Austrian led 3-1 in the third set.
Thiem ended the duel 6-2, 3-6, 7-5, 5-7, 7-5 in four hours and 13 minutes.
"It was an epic match, with so many ups and downs and rain, going back to the locker, on court again," said Thiem.
"Somehow I had the feeling that I had the lead in the whole match, and then at the end it got so tough.
"At the end, both of us we could win, and I luckily got the better in the end," he added.
Thiem set up the men's singles final on Sunday with 11-time winner Rafael Nadal, whom he lost to in straight sets at the same stage last year.
In the men's doubles final, German pair of Kevin Krawietz and Andreas Mies got past home favorites Jeremy Chardy and Fabrice Martin 6-2, 7-6 (3).
The French Open enters its final day on Sunday, also featuring women's doubles final. China's Duan Yingying and Zheng Saisai will take on second-seeded Timea Babos and Kristina Mladenovic.