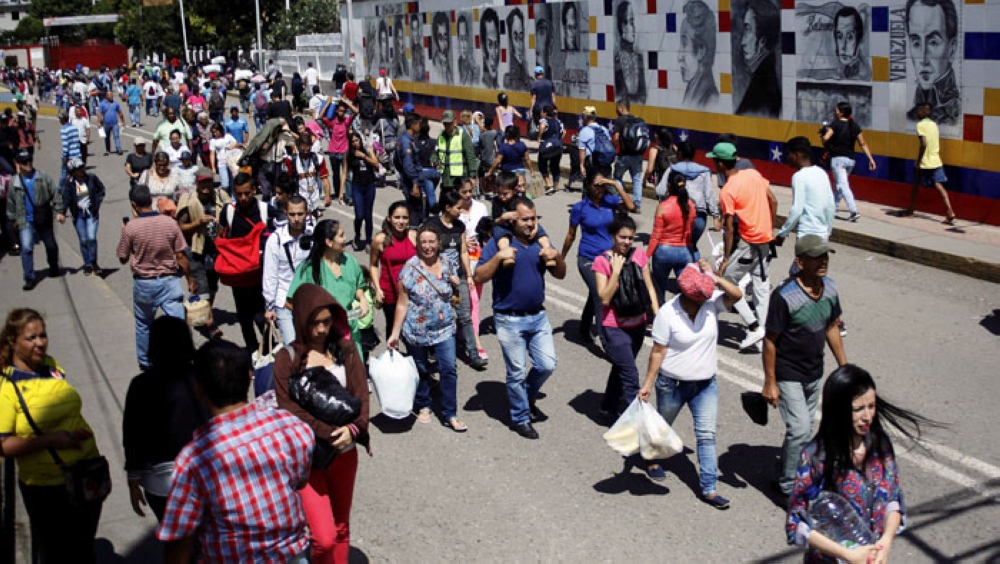 Maduro had the day prior ordered the reopening of the Venezuelan border in the western state of Tachira, near the location where the international community had massed humanitarian aid that Maduro’s government refused to take.

Early Saturday, thousands of people rushed to the border bridges between the two countries, and crowds in long queues stretched throughout the day.

“My two daughters have dengue. They have a fever, and I had to come get care in Colombia,” says Belky Rangel, 34, about to burst into tears after waiting three hours with her two daughters, five and eight, to cross to Cucuta.

At midday, 18,000 people had crossed the border from Venezuela and 8,000 from Colombia, the head of the Migration Service in Colombia, Christian Krueger, told international media.

But containers deposited on the Venezuelan side to prevent any entry of humanitarian aid, considered by the government a potential pretext for foreign military intervention, were still in place.

“They have not moved the containers at all. It is so hard getting across. There are so many people” on the Venezuelan side, says Carlos Julio Perez, 55. He waited hours to go to a medical appointment on the Colombian side.

When the border was closed, many Venezuelans crossed via hidden trails linking the two countries, putting themselves at the mercy of smugglers and armed groups.

The economically-devastated South American nation is suffering from shortages of food, medicine and other essentials amid a power struggle between socialist Maduro and opposition leader Juan Guaido, who has been recognised as interim president by more than 50 countries including the US.

Announcing the reopening of the frontier on Twitter, Maduro said: “We are a people of peace that strongly defends our independence and self- determination.”

The leader, however, did not say if other key border bridges, closed since August 2015 after two Venezuelan soldiers were wounded by suspected smugglers, would be unblocked.

More than three million Venezuelans have left their country since 2015 to flee the worst economic crisis in the oil-rich country’s recent history.