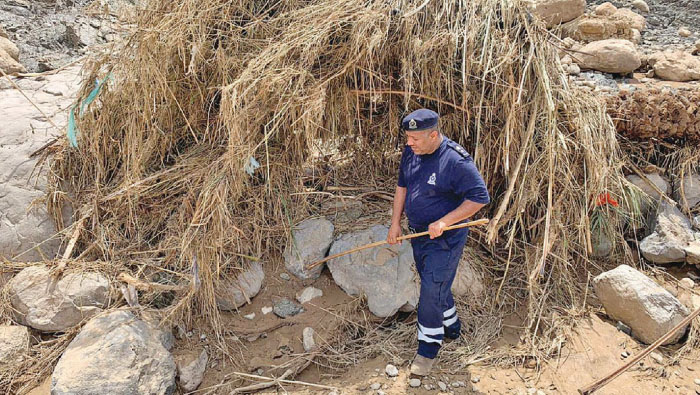 Muscat: The search for a missing Asian family of six that were swept away in flash floods on May 18 has ended after the last body was recovered on June 4.
Sardar Fazal Ahmed, an Indian expat who works as a pharmacist in Ibra, lost all his family members including his mother, father, wife and three children after the car they drove to Wadi Bani Khalid was washed away by torrential flooding.
Sardar, had managed to grab a palm tree branch and pull himself out of the fast-flowing waters in Wadi Bani Khalid, near Ibra, during the incident.
The Royal Oman Police (ROP), Public Authority for Civil Defence and Ambulance (PACDA) and rescue teams continued their search using night vision goggles, sniffer dogs, diving teams, as well as help from other volunteer teams to recover the missing bodies.
The search by the officials came to an end on June 4, when an Omani citizen recovered the body of Sardar’s two-year-old son, Zaid Khan, in the Wilayat of Saiq.
In a statement issued on Friday, ROP said: “The search for the sixth missing member of the Asian family is confirmed after his identity was confirmed. His body was found by a citizen earlier this week.
“ROP thanks all those who participated in this humanitarian mission and all those who provided information that facilitated the search process.”
Earlier, PACDA also issued a statement confirming that the final remains of Sardar’s family which went missing in Wadi Bani Khalid had been found. They thanked the citizen in Saiq, the Wilayat of Al Kamil wa Al Wafi and said: “We ask for Allah to envelop them in his mercy.”
The first body recovered by the authorities was on May 21, three days after it was swept away by flash floods in Wadi Bani Khalid. The remains recovered were of one adult female, which were then identified by Sardar as those of his mother, Shabana Begum.
PACDA, along with the ROP and the rescue teams continued the search for the remaining missing family members and found the second body on May 22. The body was identified by Sardar as of his wife, Arshi Khan.
Next day, May 23, the ROP announced that the search for the family of Sardar resulted in the discovery of two more bodies along Wadi Bani Khalid which Sardar identified that of his father, Khan Khairullah Sattar, and his four-year-old daughter, Sidra Khan.
However, the fifth body of his 28-day-old son, Nooh Khan, was recovered on May 29, 60km away from where the family had been swept away.