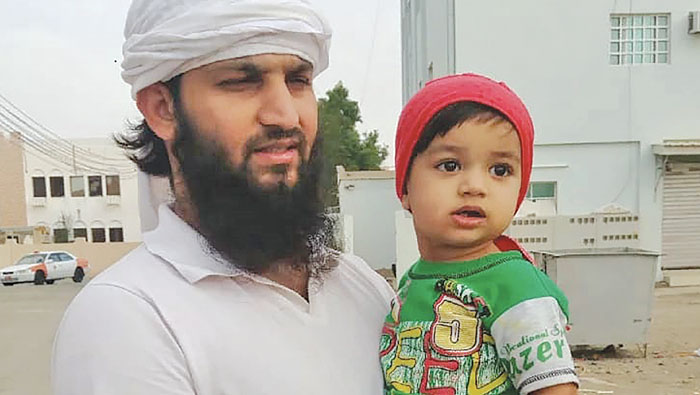 Muscat: The search operation for the two children who were swept away in flash flooding in Wadi Bani Khalid has reached Kamil Wa Al Wafi, 50km away.
Video: Expat dad whose entire family was swept away in flash flood speaks
Two-year-old Zaid Khan and his new-born brother Nooh went missing along with four other family members in the flood waters in Wadi Bani Khalid nearly two weeks ago.
Their father, Sardar Fazal Ahmed, an Indian expatriate who works as a pharmacist in Ibra, lost his entire family in the tragedy.
A spokesman from the Public Authority for Civil Defence and Ambulance (PACDA), said: “The search for the remaining two missing children is still ongoing. We are now combing wadis and areas nearby in Kamil Wa Al Wafi, more than 50km away from where the incident happened. We hope to find them soon.”
“We have been searching for them since May 18 with the help of residents in Wadi Bani Khalid. Four bodies were recovered so far, and the search goes on for the remaining two,” confirmed the PACDA official.
The four bodies recovered from a flooded wadi recently were of two adult women, a man and a child.
Sardar identified the bodies to be of his parents – Khan Khairullah Sattar and Shabana Begum, his wife Arshi Khan, and his four-year-old daughter, Sidra Khan.
PACDA search and rescue teams teamed up with Royal Oman Police officers who deployed sniffer dogs in other areas that had been affected by flooding in Oman.
Several teams of volunteers from the surrounding areas have also signed up to assist the emergency services.
Night vision goggles have been pressed into service so that the teams can continue to work through the night.