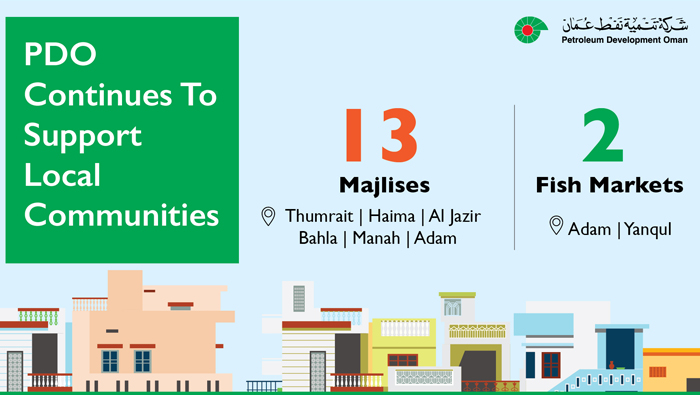 Muscat: Petroleum Development Oman (PDO) has committed to support a range of infrastructure commitments to benefit communities and boost sustainable development across the Sultanate.
The company is funding the construction of two fish markets in Adam and Yanqul, which come as part of the Ministry of Agriculture and Fisheries’ fish markets rollout plan across the Sultanate. The facilities, each of which will include storage facilities and an ice factory, will boost the fisheries industry in the area and create employment opportunities.
PDO opened its first funded fish market in Ibri at the beginning of this year and signed a commitment to construct another in Bahla last month. The addition of these latest two facilities in Adam and Yanqul will bring the total number of fish markets funded by PDO to four.
PDO is also building 13 new majlises in Bahla, Thumrait, Al Jazir, Manah, Haima and Adam as part of a second phase, which was mapped according to population density and beneficiaries in co-ordination with Wali offices. The buildings are being funded by the company in an effort to provide safe and suitable community gathering spaces for the villages and the surrounding communities.
The majlises will be built according to a standardised design developed in-house to meet customer expectations and quality standards.
Fifteen Memorandums of Understanding (MoUs) confirming these commitments were signed at an official ceremony held under the auspices of Eng. Khalid bin Hilal Al Busaidy, Undersecretary of the Ministry of Interior, at PDO’s Knowledge World venue in Muscat on Tuesday.
PDO Managing Director Raoul Restucci said: “Our Social Investment programme aims to contribute to the sustainable development of Omani communities and to address their specific needs through a variety of different projects executed in co-operation with governmental and non-governmental bodies and focused on key themes.
“Our mantra is that we only succeed if the communities in which we operate succeed, and these new projects will undoubtedly serve citizens in their day to day lives for many years to come.”
The MoUs confirming these commitments were signed by Restucciand senior government officials, including Dr Saud bin Hamood Al Habsi, Undersecretary of the Ministry of Agriculture and Fisheries for Fisheries; Sheikh Hamad bin Rashid Al Maqbali, Wali of Adam; Sheikh Musallam bin Mohammed Al Wahshi, Wali of Manah; and Sheikh Saud bin Hilal Al Shaqsi, Wali of Al Jazir; Sheikh Ali bin Mansoor Al Busaidi, Wali of Bahla; Sheikh Suhail bin Mahad Al Mashani, Wali of Haima; and Sheikh Musallam bin Ahmed Al Hadhri, Wali of Thumrait.