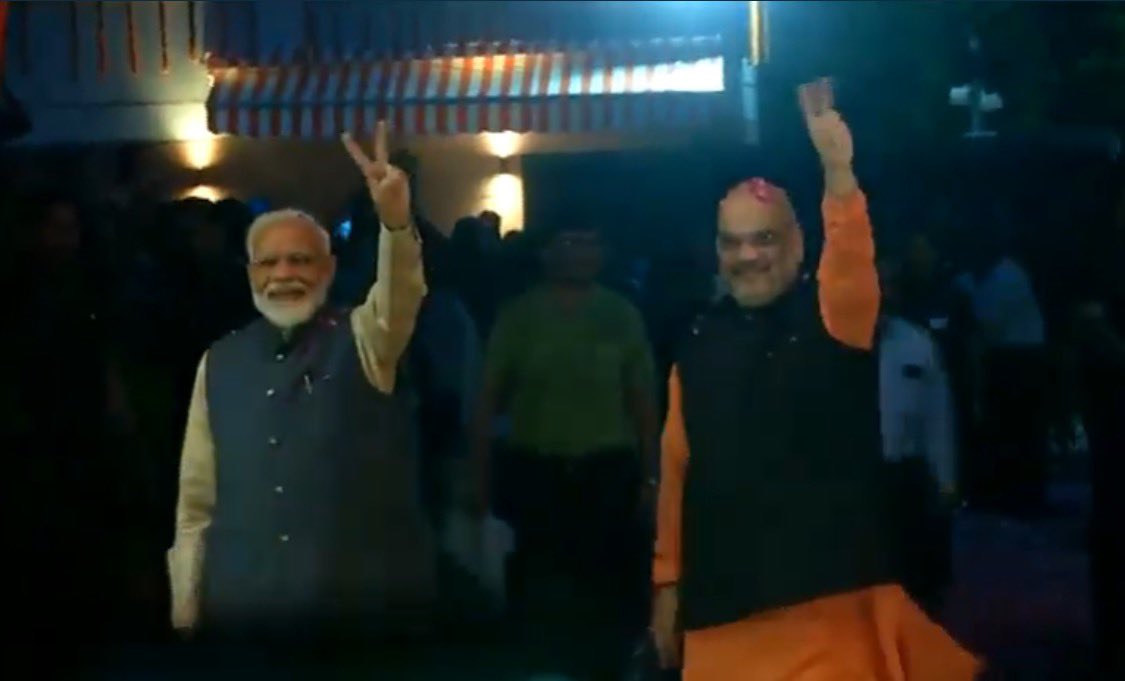 New Delhi: PM Modi led the National Democratic Alliance towards what is certain to be a resounding victory for a second term in office, as his message of nationalism, security, Hindu pride and a new India was wholeheartedly embraced by voters across the country.

Riding on a massive Modi wave sweeping through most parts of India, the BJP will return to power as it led in 292 seats while the Congress trailed far behind with 51, according to trends released by the Election Commission for all 542 seats that went to polls.

Rahul Gandhi, president of the Congress party, congratulated Prime Minister Narendra Modi this evening for his spectacular re-election and asked him to "take care of the interests of the country"; the 48-year-old also conceded defeat in Amethi, asking political opponent and BJP leader Smrithi Irani to "nurture with love" the constituency that has been with his family for four decades.

Gandhi has reportedly offered to resign as President of the Congress, though the party is unlikely to accept. When asked about this, he said "Can this be between me and the Working Committee (the party's top decision-making body?”

Gandhi has been elected to parliament from Wayanad in Kerala; when he chose it as his second constituency, he was accused by the BJP of running scared from Amethi to the south in search of Plan B.

On a day that saw Modi, 68, return to power with numbers that surpass his record mandate of 2014, Gandhi said he would not take questions about what caused his party's crushing defeat - the Congress is placed to win just 52 seats as compared to 44 in the last general election. "Today is not the day for that," he said, claiming that attention must remain for now on Modi's victory and the unambiguous choice of the people.

He congratulated Modi twice while professing "janata maalik hai" (we report to the people). To his party workers, he said, fear not ("daro mat"). "We will win eventually," he said, reiterating that the Congress vs BJP is a contest of ideologies.
Gandhi's leadership will be scanned carefully now, though critics within his party which is wedded to its long-term sycophancy of its First Family, will choose to do so largely anonymously.

At the end of last year, the Congress's hopes of displacing Modi soared after it won the key heartland states of Madhya Pradesh, Chhattisgarh and Rajasthan from the BJP in state elections, largely driven by voter concerns about weak farm incomes and a lack of jobs.

But the Congress then fumbled communications on key policies, with a publicity campaign this year that escaped the notice even of some of its own workers. But what may have really blown up its chances was its inability -or unwillingness- to strike pre-election alliances in states like Uttar Pradesh. In one key area after another, the party was seen as putting its own plans for revival ahead of the need for a combined opposition attempt to block Modi.

Gandhi is also being faulted for embarking far too late in the lengthy voting period that lasted 39 days on a series of television interviews. His attempt to pin corruption on the PM over India's fighter jet deal with France, which saw him coin the phrase "chowkidar chor hai", backfired feel top Congress leaders who, predictably, shared their views today while asking not to be named.

Gandhi met through the day today with his sister, Priyanka Gandhi Vadra, who was assigned a key role in the battle for the politically key state of Uttar Pradesh, and his mother Sonia Gandhi ,who led the party till he took over its No 1 job 2 years ago.

He told reporters that he will meet with the Working Committee, the Congress' top decision-making body to post-mortem the election debacle and decide on next steps.

His defeat in Amethi to Smriti Irani, who has contested the Gandhi bastion only once earlier, screenshots the extent of the decline of both the Congress and the appeal of its First Family. As one party leader, Abhishek Manu Singhvi said, "We need reinvention, not introspection." However, as many rebutted, this too is a promise the Congress has made before.