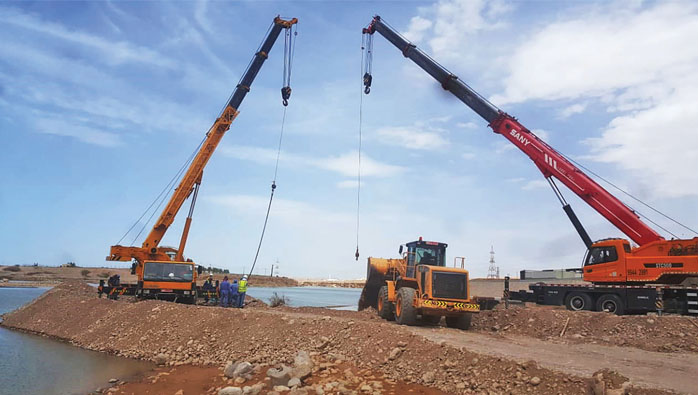 Ibra: The Public Authority for Water (Diam), in cooperation with a number of government agencies, is continuing its efforts to ensure the continued supply of potable water to areas fed by the main water supply pipeline which feeds the Governorates of South and North Sharqiyah.
These agencies have carried out a number of detection and repair work, which included two directions: in the first direction works continued to repair damages in the affected pipeline, but the damage to the pipeline, the difficulty of the situation and the continued flow of the Wadis prevented progress in this direction.
The teams in the second direction worked on the construction of the new water pipe. The technical teams started building a temporary alternative pipe that crosses the dam’s water after receiving the pipes and materials needed to carry out the work, while the teams are currently working on the replacement pipe at an accelerated pace.
The teams continued to provide water to citizens and residents. The sub-committees continued the supervision process to ensure the continuity of water supply in the wilayats and villages in the Governorates of South and North Sharqiyah and to ensure that the pumping of water to the wilayats continues through the quota system by pumping rotation between them to maintain water levels in the collective reservoir as much as possible.
Diam called upon its subscribers to continue rationalising water consumption and following its reports continuously and not to pay attention to any other data and information.