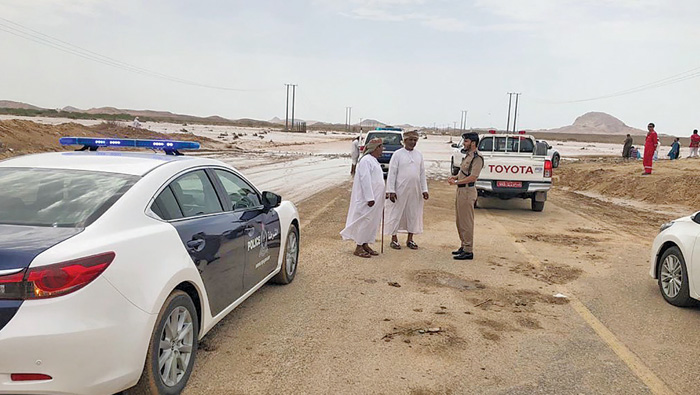 Muscat: Royal Oman Police (ROP) has started jailing and fining drivers who are crossing flooded wadis.
With many parts of the Sultanate receiving heavy rain over the past few days due to a low-pressure weather system, the Royal Oman Police (ROP) has already had to take action against those who risk their lives and the lives of others by crossing flooding wadis.
The heavy rain that lashed the country has claimed four lives so far, according to official figures.
According to officials at the ROP, several people have been arrested so far after they put their lives and others in danger by crossing flash flooded wadis.
On Tuesday, two drivers who were crossing a wadi in Al Dhahira region and endangering lives, were arrested by ROP.
ROP said : “Al Dhahira Police Command took legal action against two drivers who risked crossing the Wadi stream with their vehicle and endangering their own lives and the lives of others.”
The police statement added: “Article 49 of the Traffic Law stipulates that any person who ‘intentionally crosses the valleys in such a way as to endanger his life or the life of passengers with him or others,’ shall be liable to imprisonment for a term not exceeding three months and a fine not exceeding OMR 500.”
An official at the ROP said: “People have been arrested for crossing wadis nationwide. Crossing wadis is an offence punishable by a hefty fine and a jail sentence. It puts your life and the lives of others in danger. Please be careful while driving especially with the running wadis.”
He explained that despite the deployment of patrols and rescue teams in areas close to wadis by ROP and Public Authority for Civil and Ambulance, many still repeatedly cross wadis and aware of the dangers of wadi drifting.