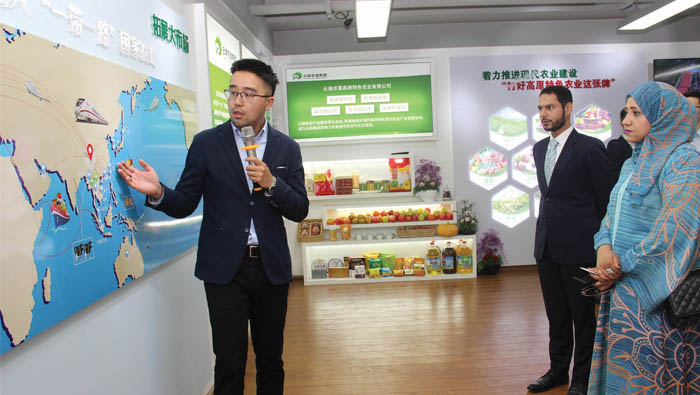 Yunnan (China): The Public Authority for Investment Promotion and Export Development (Ithraa) visited a number of large companies in Yunnan Province to inform them of the investment opportunities available in the Sultanate.
The delegation visited the Yunnan State Farms Group, owned by the state in Yunnan Province. The group is also known for pioneering agricultural production.
The Omani delegation also visited the Yunnan Group, which specialises in investment in the transport and communications sector, which is the largest group of comprehensive transport companies in the province.
During the meeting, they discussed ways of future cooperation and the areas in which Chinese companies can invest in Oman .
Smart Tourism Exhibition
The pavilion of the Sultanate at the International Smart Tourism Exhibition during the past two days attracted the interest of visitors who came to know about the Sultanate’s tourism and investment potential.
Omar bin Salim Al Jabri, representative of the Ministry of Tourism in the exhibition said that the aim of the ministry’s participation in the exhibition is to promote tourism in the Sultanate, to learn about the experiences and expertise of other participating countries and about the modern technologies used to encourage tourism to those countries.
The Special Economic Zone Authority at Duqm (SEZAD) also participated in the International Smart Tourism Exhibition by presenting booklets and publications in Chinese and English to familiarise the business community and tourists in China with SEZAD’s investment advantages and investment opportunities available in the tourism sector, hotels in Duqm and the moderate climate of Duqm throughout the year.