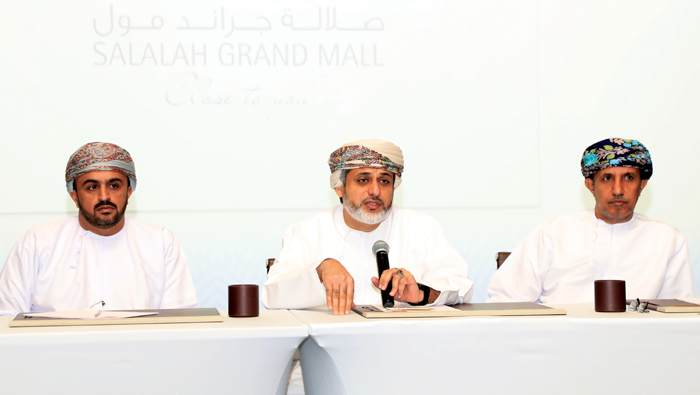 Muscat: Salalah Commercial Centre hosted the signing ceremony of 27 new lease agreements for the new ‘Salalah Grand Mall’ yesterday at the Grand Millennium Muscat.
The mixed-use commercial complex located in the Dhofar Governorate. The mall has been developed by the Salalah Commercial Centerin partnership with the Ministry of Defence Pension Fund and Al Madina Real Estate Company. The Mall is expected to open before the end of this year.
The new Salalah Grand Mall is located in Adahariz, in the Wilayat of Salalah. It covers an area of 51,000 square meters, with a total floor area of over 91,000 square meters. As an international shopping mall it encompasses a huge hypermarket,a number of retail stores of the finest local, regional and international brands, food court, and a number of leading cafes with stunning views of Salalah city.
Commenting on this occasion, Hamad Mohammed Hamood Al Wahaibi, Chairman of the Board of Directors of Salalah Commercial Centre noted, “We are constantly seeking good investment opportunities and pioneering projects. Especially those that benefit the Fund’s shareholders and contribute towards enhancing the performance of the national economy through economic diversification. We are delighted to welcome the first batch of brands to our latest projects in the Governorate of Dhofar – the Salalah Grand Mall. The mall will be of great value to the Wilayat of Salalah and, by extension, the Dhofar Governorate as a whole. It will at the same time contributetowards strengthening basic services in the area and offering the citizens and residents an opportunity to shop for some of the world’s finest brands without having to travel to Muscat or outside Oman. We are confident that this project will play a leading role in achieving these development goals for the Wilayat of Salalah, which is considered one of the most promising economic areas of the Sultanate, as well as provide more job opportunities for Omanis.”
Engineer Khamis bin Mubark Al Kiyumi, Chairman of the Board of Directors of Al Madina Real Estate said, “Al Madina Real Estate aims to put its own mark on strategic real estate development projects in the Sultanate. The Salalah Grand Mall was developed following the tremendous success of Muscat Grand Mall, which has encouraged us to repeat the experienceforthe people of the Dhofar Governorate. The mall opens doorsfor foreign investments in the retail sector, and job opportunities for the people of the governorate, as well as enhances the attractiveness of the region from a tourism perspective.”
Eng. Abdulrahman Awadh Barham, Board Member of Salalah Commercial Centre, in his speech, stressed on the importance of attracting leading brands to Salalah, the capital of Omani tourism,saying,“the Dhofar Governorate and the city of Salalah have demonstrated their importance as leading Omani tourism destinations, attracting more than 826,000 visitors during the last Khareef season, an increase of over 28% over the previous year. This number is expected to reach one million visitors this year; reaffirming the feasibility of investing in Salalah’s promising future.”
“A strong infrastructure is of the utmost importance in order to attract international companies to the Governorate of Dhofar, and the Wilayat of Salalah in particular. This is what the Omani government has been working on building for several years now. It is our belief that the private sector has a significant role to play in this endeavour by partnering with the government in its projects. This is why we have jointly invested in this leading project with the Ministry of Defence Pension Fund; a project which is set to be one of the most important tourist and commercial landmarks in the region over the coming period. It will also positively impact Salalah’s presence on the map as a modern tourist location with infrastructure and services that meet international standards,” he added.
Salalah Grand Mall will include one of the most renowned retail outlets across the Gulf region, LuLu Hypermarket, along with the world famous Landmark Group, world-class entertainmentcenterFaby Land, luxury Arabian fragrance brand Amouage, as well as other well-known brands such as Mamma Mia, Arabian Oud, Shosho, Steak House, Oud Elite, Salalah Gallery, Home and More, Subway, Papa Pizza, Crazy Caravan, and many more.
The Ministry of Defence Pension Fund is one of the largest pension funds in the Sultanate of Oman. It has visions and policies that have significantly contributed to the services it provides to all related segments and entities. This is in addition to its active participation in the economic development of the country through the shares it has in companies listed within the Muscat Securities Market. It also does so by establishing new projects and entering into partnerships with specialised bodies in order to boost the financial capacities of the Pension Fund and provide value to both the country and its citizens.
Al Madina Real Estate is one of the largest real estate development companies in the Sultanate and has extensive experience in major real estate and tourism development projects. The company has developed many of them over the past years including Tilal complex, which includes the famous Muscat Grand Mall, the 5-star Grand Millennium Hotel, comprising of a number of business and residential units and hotel apartments, as well as Shaden Al Hail, and Qurayyat Integrated Tourism Complex (ITC), which is currently under construction.
-Ends-