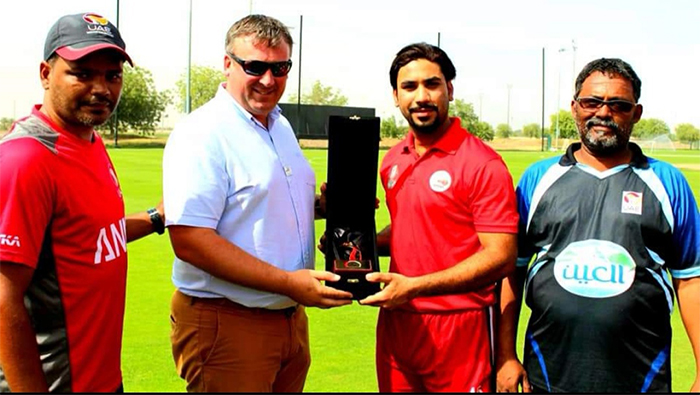 Al Ain: An Omani cricket team comprised entirely of nationals enjoyed their first overseas wins when they beat Al Ain Cricket Club as part of a tour of the United Arab Emirates.
Oman Cricket Team Seeb, which consists of players from the region of Seeb and the surrounding area, were on tour in the UAE recently and played two games in Al Ain.
Their first game, on May 3, saw them beat Al Ain CC by seven wickets, with the hosts batting first. It was A Mustaffa who was the pick of Al Ain’s batsmen in their 25-over game, as he top-scored with a contribution of 51 before Arif Daad dismissed him, but the other batsmen on the team fail to get properly going, as Al Ain were dismissed for 163.
Eight of the 10 wickets that fell saw batsmen depart for single-figure scores. It was Essa Al Balushi who picked up two wickets for Seeb, with Arif Daad adding another three. In response, it was Essa who also performed well with the bat, scoring 59 runs from 34 deliveries before retiring.
Abbas Al Balushi and Sufyan Mahmood completed the innings for Oman by contributing the bulk of the remaining runs to see the Omanis rack up their first win of the tournament after 20 overs of play.
A day later, on 4 May 2019, OCT Seeb, which are administered by the Oman Cricket Association, the governing body for cricket in the Sultanate of Oman, played against Al Ain’s under-17s.
Batting first, Oman scored a mammoth 201/7 in their allotted 25 overs. It was once again Essa Al Balushi who excelled, as he contributed a brisk 44 from 24 balls, but the innings of the day had to go to Yousuf Rahim. His 87 came off just 38 deliveries and featured seven fours and seven sixes. Abbas Al Balushi (16) and Sufyan Mahmood (14) also contributed.
Zahidullah Khan picked up three wickets for Al Ain cricket club, with Saifullah Khan, Fahad Namatullah and Waseemullah all taking one wicket each.
But the Omanis made quick work of Al Ain’s under-17s when they came out to bat. Ekramullah Mohammed (22) and Faisal (16) both made promising starts, but failed to establish themselves. Saifullah Khan’s 26 at the tail-end was the highest individual score for Al Ain, as they crashed out for a total of just 109 after 19.4 overs.
Speaking to Times of Oman, Dad Mohammed Al Balushi, a senior member of the Oman Cricket Association said the tour had been a good experience for his team.
“It was a memorable win for OCT Seeb as we became the first all-Omani team to register a win in an overseas match against Al Ain CC,” he recalled. “In their second game against Al Ain CC, OCT Seeb recorded a massive 92-run victory as they became the first all-Omani team to clinch an away series 2-0.
He added: “This was in part, thanks to skipper Yousuf Al Balushi, who lived up to his reputation of being called the Andre Russell of OCT Seeb, by scoring an impressive 87 off just 38 balls which included seven towering sixes. It was a great and memorable tour for OCT Seeb.”