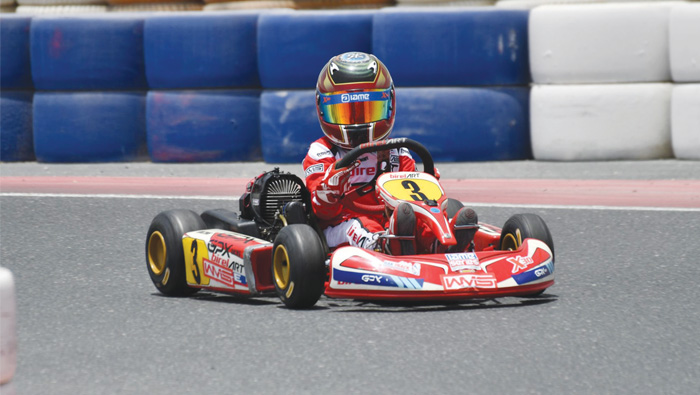 Dubai: The future stars of go-karting celebrated their achievements at Dubai Kartdrome in the final championship round of the Dubai Bambino Cup on May 11. Shonal Kunimal, who was faultless on the day, picked up his fifth consecutive victory.
Despite challenges in the first time-trail, Shonal continued his winning streak to dominate the final championship Round five in the Dubai Bambino Cup. Out of 4 time-trail, Kunimal won 3 time-trials on his way to victory, achieving an overall best lap time of 1:15.408 on the 1.25-kilometre at Dubai Kartdrome.
Murray and Anthoy looked to topple the championship leader, but the best of both drivers could not propel them to the top spot.
Shonal finished a perfect season and claimed the 2018-2019 championship over Anthony Joe Khalil by 31 points.
Since October of 2018, Kunimal has withstood challenges, but following five rounds he remained undefeated to the last to take his first Bambino Cup crown. Dubai Kartdrome Manager David Bright remarked, “Congratulations to Shonal for winning the championship; he has a promising future in racing.”
After five and final championship rounds, Shonal Kunimal (200 points) remains in the control of the 2018-2019 Bambino Cup Championship. Anthony Joe Khalil (169 points) is giving chase, currently in second-place, and Nicholas Kimi Stura (158 points) in third.