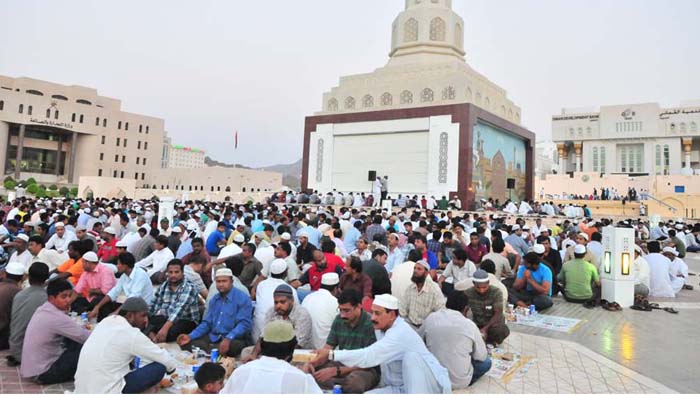 The fasting Muslims will gather to break the fast at the fixed time. The Iftar will be followed by the Maghreb prayer.

Arrangements have also been made for women and children, who are expected to be a large part of the gathering like on earlier occasions.

According to Suhail Khan, lead organiser of the Iftar, the tradition of organising Hyderabadi community Iftar was started 17 years ago.

It was in 2002 this largely-attended Iftar was first held and this year also elaborate arrangements have been made to serve the rozedaars.

Suhail added, Public Iftar parties, a common feature among Muslim communities across the world, offer a meeting ground for people from different communities and nationalities on one platform.

This goes a long way in generating goodwill in society. People understand each other better and build bonds of brotherhood. “serving rozedaars during ramadhan is one of the most rewarding act.”

Salman Amjad , a regular volunteers at the iftar said he has been a part of the annual iftar gathering for the past fifteen years, and that breaking roza together gives him a sense of brotherhood. “When people pray together, even the good deeds of a single person in the group are enough for Allah to grant barqat(blessings or prosperity) to all of us,” Mr. Salman said.

According to Mr Ismail Baig, member of the organising team, The main goal of the host community is to seek the pleasure of the Almighty by way of serving people and displaying respect for their fast. Islam brings people together and provides such social occasions to create bonds of unity, brotherhood and co-operation among members of the society.

The Hyderabadi community invites all brothers and sister who are fasting to the annual community Iftar.