His Majesty’s greetings conveyed to President of Egypt 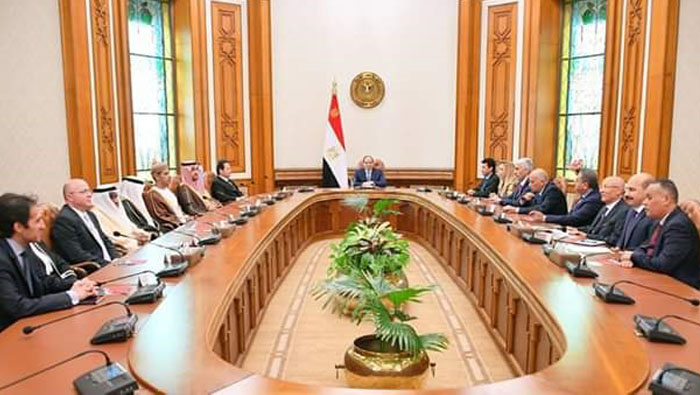 Cairo: President Abdel Fattah el-Sisi of the Arab Republic of Egypt received at Al Ittihadiya Palace in Cairo yesterday Sheikh Sa’ad bin Mohammed Al Mardhouf Al Sa’adi, Minister of Sports Affairs, as well as Arab Ministers of Youth and Sport, on the sidelines of their meetings in Cairo.
Sheikh Al Sa’adi conveyed greetings of His Majesty Sultan Qaboos bin Said along with best wishes of permanent health and happiness to President el-Sisi, and the brotherly Egyptian people further progress and growth.
On his turn, the Egyptian President asked Sheikh Al Sa’adi to convey his greetings along with best wishes of permanent health and wellbeing to His Majesty the Sultan, and the Omani people progress and prosperity.
President el-Sisi touched on a range of issues of concern to the Arab youth, as well as the challenges facing the region. Meanwhile, the Arab Ministers of Youth and Sport concluded their 42nd meeting, which was held in Cairo. The meeting addressed the topics listed on the agenda that are related to the sport and youth aspects in the Arab countries.