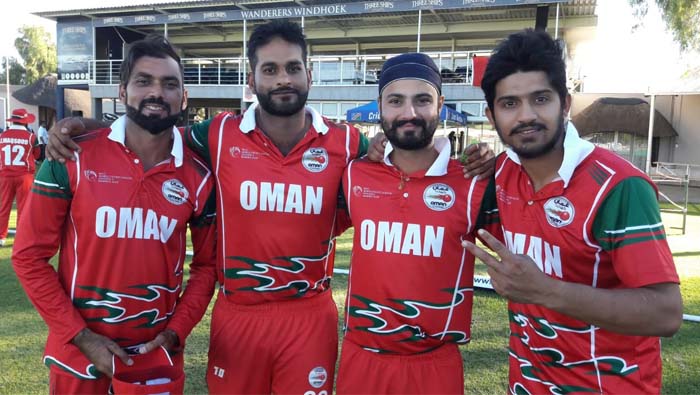 MUSCAT: Tuesday, April 23 will never be forgotten by cricket followers in Oman — on this day Oman joined am elite group of nations holding One-Day International status. Sitting strong on top of the table, Oman won its third successive game in ICC’s WCL Division Two in Windhoek, Namibia on Tuesday which ensures the Sultanate will be among the top four sides to have earned the much-coveted One-Day International status for the next two and a half years.
Oman, and the other top three teams in the top four, will now join UAE, Scotland and Nepal in the new ICC Cricket World Cup League Two and play as many as 36 ODIs over a period of 30 months. Oman coach Duleep Mendis had said before leaving for Namibia that qualifying for the ODI status would be among their foremost goals in Namibia and they would be fighting hard to achieve that.
Left-arm paceman Bilal Khan bowled superbly, taking four wickets, while Jatinder Singh batted sensibly against Hong Kong to make sure Oman secured its third successive win as the only unbeaten side in the six-nation tournament.
Bowling like a well-oiled machine, Oman attack kept Hong Kong on the back foot for much of its innings, dismissing it finally for 176 in 48 overs. Only Babar Hayat batted with some authority, scoring a solid 56.
Apart from Bilal, leg- spinner Khawar Ali bowled well too, claiming 3 for 35. Requiring a win to make sure it reached its first goal of a top-four finish, Oman took a slow and steady route to victory, overhauling the total in the 48 th over for the loss of only three wickets. Jatinder was involved in a 79-run solid opening partnership with Khawar, laying the foundation for another successful chase. Muhammed Nadeem’s amazing form with the bat continued as he remained unbeaten on 31.
“It was a great victory today. Restricting Hong Kong to a small total was the key to success. Our bowers are going into games all guns blazing. Even our batsmen are full of confidence. They are on a roll and I hope we are able to carry it on till the tournament ends,” said a delighted Mendis after the win over Hong Kong.
In the day’s other games, USA defeated PNG by 10 wickets while Namibia thrashed Canada by 98 runs.
Oman now play second-placed Namibia today in an important game for both sides.
Brief scores: Hong Kong 176 all out in 48 overs (Babar Hayat 56 – 4x4, 1x6, Tanvir Afzal 32 – 5x4, Scott McKechnie 26 – 2x4. Bilal Khan 4-30, Khawar Ali 3- 35) lost to Oman 177 for 3 in 47.3 overs (Jatinder Singh 65 – 4x4, Muhammed Nadeem 31 not out, Khawar Ali 28 – 2x4, Aqib Ilyas 27 – 3x4, 1x6) by 7 wickets.