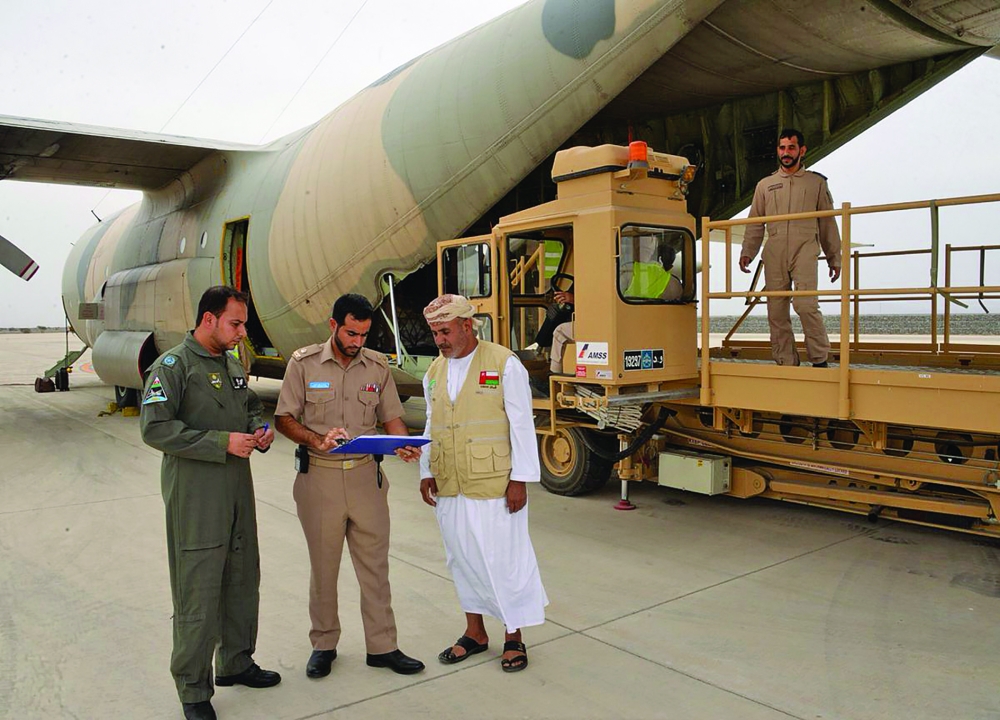 Muscat: His Majesty Sultan Qaboos bin Said has been praised by residents and citizens in the country following his decision to send aid to Iran, as it continues to deal with the impact of heavy flooding.
The aid was flown to Iran aboard several Royal Air Force of Oman transport aircraft. Since 23 March, Iran – with whom Oman jointly controls the Strait of Hormuz – has been subjected to intense flash flooding, and it is hoped that this aid will reach those who need it.
“Mohammed Omair said, “Hats off to His Majesty Sultan Qaboos bin Said, he is a great leader. The Sultanate of Oman is always winning our hearts. May God continue to shower his blessings on His Majesty and this country, Oman” and Mohammad Osama Rawat added, “This is a great gesture. Long live Oman. May God bless His Majesty with good health and long, active life. He truly deserves the Nobel Peace Prize.”
According to Iran’s state-run news agency, IRNA, 70 people have died, with thousands of reported injuries and hundreds of thousands left homeless after three weeks of floods that began in the northern regions of the nation and moved westward.
The agency also added that 77 schools across the country were destroyed due to flooding.
Saju George Reuben said, “Oman is a great country and His Majesty is a great leader, and truly a world peace icon,” as Imran Jafri added, “Sultan Qaboos is a great king and Oman is a great country.” Auwal Adam said, “He maintains peace and tries to build good relations with all groups,” with Mehdi Najafi simply adding, “Long live His Majesty Sultan Qaboos.”
Omani national Maryam Tariq Al Balushi added, “May God bless His Majesty Sultan Qaboos,” as Riduan Sama commented, “His Majesty does not discriminate: we are all one.” Tahir Abbas said, “May God always keep you well. Long live His Majesty Sultan Qaboos,” and Zahid Hassan Ahmed said, “God willing, Oman is a good country.”
The World Health Organisation’s Eastern Mediterranean Regional Office has said that they have airlifted essential medical supplies to Iran to respond to the growing health needs of thousands of people who have been displaced as a result of heavy flooding in many provinces in the country.
“Together with the United Nations country team led by the UN Resident Coordinator Ms Ugochi Daniels, WHO will continue to provide full support to the Ministry of Health and Medical Education and the people in Islamic Republic of Iran to address urgent health needs and undertake recovery measures.” said Dr Christoph Hamelmann, WHO Representative in the country. He also asked the international community to make further funding available. “We want to express again our deep condolences to all of those who have lost loved ones and will do our best to provide assistance to those in need.”
“From the first day of the flooding, WHO has led and coordinated the health response of the UN country team in support of the Ministry of Health and Medical Education,” said Laleh Najfizadeh, WHO’s Health Emergency Programme Coordinator. A statement from the UN High Commissioner for Refugees (UNHCR) added, “Supporting the flood response in coordination with the Government of Iran, a UNHCR air freight of emergency relief items for refugees and host communities landed in Tehran. It includes 1,000 tents as well as blankets, sleeping mats and kitchen items and brings welcomed support to government-led relief efforts on the ground.”