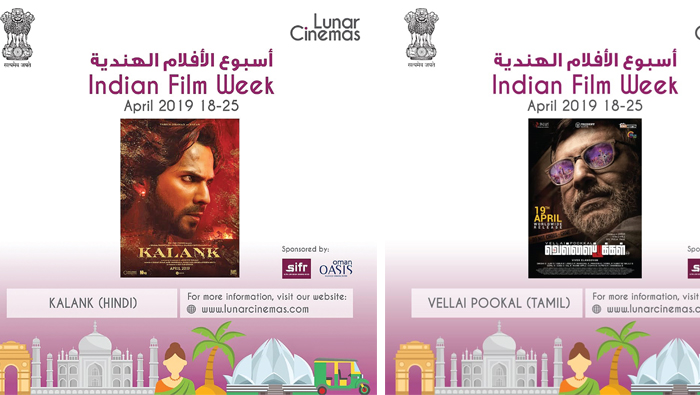 Muscat: Indian Film Week is the latest in many joint collaborations for film lovers in Oman, the country’s ambassador to the Sultanate has said.
Indian Film Week runs from 18 to 25 April 2019, and Munu Mahawar, the Ambassador of India to the Sultanate of Oman, has said that in future, film lovers in the country can expect to see many more joint Omani-Indian productions on cinema screens.
He used the recent trilingual Arabic-Hindi-Malayalam film Zayana to illustrate this example.
“Recently, there was a movie that was produced in Oman but mostly shot in India,” he said. “You have of course heard of Zayana, which was screened here. There are a couple of other movies that are being produced jointly. Some are being produced in India but being shot here in Oman, so that is one area that is of interest to both sides.
He added: “I cannot say that we have reached a major breakthrough, but I do see huge possibilities. Oman as a location is extremely attractive for Indian filmmakers and there is a lot of talent in Oman who can benefit from India’s experience of film making, so I am quite sure that in the coming days and years, we will see greater collaboration.”
Indian Film Week is being held in collaboration with Lunar Cinemas, who have organised a special rate of OMR 2 inclusive of drinks and popcorn for all those who wish to come and see the Indian films being shown.
The opening event was held at Al Muzn Mall in Al Hail on Thursday evening, and for the rest of the week, Lunar Cinemas will be screening at their three different venues, five films in three different languages. “We have been sharing information about this through our social media platforms,” explained Mahawar. “These films are Kalank in Hindi, Madhura Raja and Mera Naam Shaji, both in Malayalam and Vellai Pokkal and Kanchana in Tamil.
Lunar Cinemas’ objective is to attract more viewers to their halls, and this also allows us to promote Indian cinema.
He said: “This is one area which is growing. It is a new area of partnership. So far, the screening of Indian films was all this partnership was limited to, but gradually, we are moving forwards in the area of co-production, and that is sure to open new opportunities. We have received very positive, constructive coverage towards embassy events.”