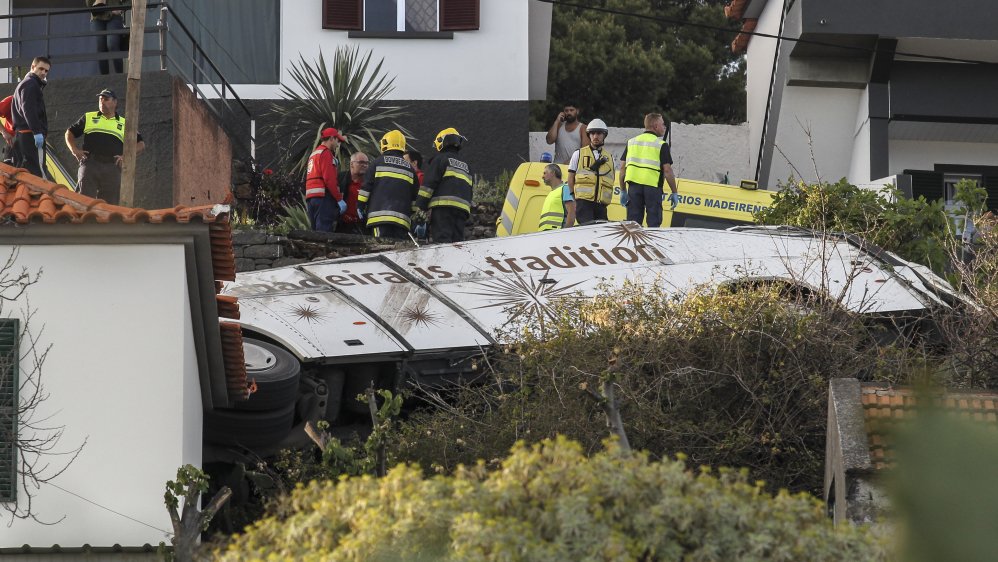 Madeira: At least 29 people, most of them reported to be German nationals, died in a tourist bus accident on the Portuguese island of Madeira on Wednesday.

The bus carrying 55 people rolled down a steep hillside after veering off the road on a bend in Canico, the coastal town's mayor, Filipe Sousa, told reporters. The crash injured at least 22 more, Sousa said. All the tourists in the bus were German, but some pedestrians may have been hit by the vehicle, he added.

Sousa later said one of the passengers died in hospital, while the driver and a guide were injured but survived. The group were reportedly booked through the same booking agency and were mostly aged 40 to 50 years old.

Other members of the same group of German tourists were traveling in another bus, which was not involved in the accident, a regional civil protection spokesman told reporters.

SAM, the transport company which owns the bus, said late Wednesday it will work with authorities to determine the cause of the crash.

"It's our will and our determination that all the facts, reasons and responsibilities surrounding the accident are investigated," SAM wrote in a statement cited by Portuguese news agency Lusa.

By mid morning on Thursday, workers had finished clearing the scene of the accident.

German Chancellor Angela Merkel expressed her condolences for the victims of the crash. "It's with sadness and dismay that I think of our compatriots and all the other people who were affected by the terrible bus accident on Madeira," Merkel said in a statement shared on Twitter by her spokesman.

Merkel thanked local emergency workers and doctors and said Germany's Foreign Ministry was working with local officials to support those affected and work out the cause of the accident.

She wished those injured a swift recovery from the physical and psychological injuries.

The Foreign Ministry in Berlin confirmed on Twitter that German tourists were among the victims.

"We are shocked to learn of the tragic bus accident in Madeira. Unfortunately, we have to assume that there are victims from Germany. Our sympathies go out to their families and friends," the tweet read, which also had the number of a hotline with a Berlin area code.Portuguese Prime Minister Antonio Costa sent a message of condolences to German Chancellor Angela Merkel "at this difficult time."Madeira is a four-island archipelago located 935 kilometers (581 miles) off the coast of Morocco. It is one of two autonomous regions of Portugal — the Azores being the other — and attracts more than a million tourists annually.