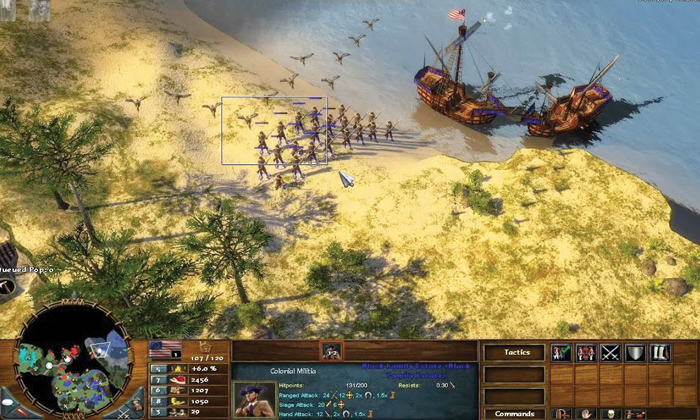 While Age of Empires may have had a global audience, it has not always represented all of the globe’s people.
Until, that is, Microsoft Game Studios brought out their expansions for Age of Empires III, and in doing so, literally took the game to areas previously undiscovered and unexplored.
Age of Empires: The War Chiefs takes the famed, critically acclaimed real-time strategy game to the Americas, and introduces us to a world that many of us have heard of, some have seen, but few have had a chance to experience, and that’s the truth. Age of Empires: The War Chiefs brings to gamers the Native American tribes, to its incredible RTS game, and is available to buy and download across the world.
While the main game showcased several European civilisations, including Britain, France, Germany, Portugal, Spain, Russia and Turkey among others, the War Chiefs expansion pack has incorporate three Native American civilisations.
The Red Indians are represented by the Iroquois, whose lightning-quick infantry are to be feared, and the Sioux, whose thundering cavalry which wield rifles, bows and machetes can make even the most seasoned soldier quake in fear.
The third Native American civilisation are the famed Aztecs, who have some of the best foot soldiers in the game. The horse was not native to Central America, as was steel and gunpowder, but that didn’t hinder the Aztec empire, whose sturdy cotton armour and obsidian weapons made them one of the most feared fighting forces in the Americas.
While these three civilisations are available alongside the European ones for players, another civilisation is available solely within the War Chiefs’ single-player campaign. The game is set in the early years after American independence, and as a result, a fledgling United States of America is the nation players control in the single-player campaign, which is split into two acts.
The first picks up after the original Age of Empires III campaign, which saw Morgan Black of the Knights of St John of Malta, whose grandchildren went on to thrive from the treasures he amassed and build their own thriving businesses...for a time.
The first act of the War Chiefs campaign, titled Fire, features Nathaniel Black, the great-grandson of Morgan, who is now raised by his Native American mother Nonahkee and his uncle Kanyenke, after his father John Black died while ousting the British.
It is here that we first get to play as the Native Americans, with Nathaniel and Kanyenke trying to keep the Iroquois Confederacy, as well as the Mohawk and the Seneca, their fellow Red Indians, from fighting in the American War of Independence.
When negotiations go awry, though the duo are forced to fight their fellow sons of the soil, and although they do win, their victory is short-lived.
On returning home, the two find that a group of Hessian German mercenaries have allied themselves with the Mohawk and have kidnapped Nonahkee.
His search for his mum drives him straight into the path of George Washington, and the two unite when they realise that their objectives take them in the same direction, and require them to face a common enemy.
The campaign and these indigenous civilisations aside, there are several other improvements and additions Microsoft Games have made to Age of Empires III.
Chief among them is the fire pit, where players can task their villagers to perform sacred dances that provide their civilisations with benefits, such as an increase in population, the automatic healing of soldiers, free warriors and many more improvements.
All in all, Age of Empires III – The War Chiefs is a fun game that is surely worth playing this weekend, or whenever you have a bit of free time. – [email protected]

The Short and Skinny
Name: Age of Empires III – The War Chiefs
Genre: Historical RTS
What it’s about: In the 18th century, America was very different to the world we know today. Age of Empires III – The War Chiefs gives gamers the chance to experience just how important the Native Americans were in shaping the nation we know today, and the sacrifices they made to make that happen
Produced by: Microsoft Game Studios
Platforms: Windows, Mac OSX
Where to buy: Steam, Humble Bundle, Amazon, G2A Games, Age of Empires Website, Microsoft Store
IGN Rating: 8.2/10