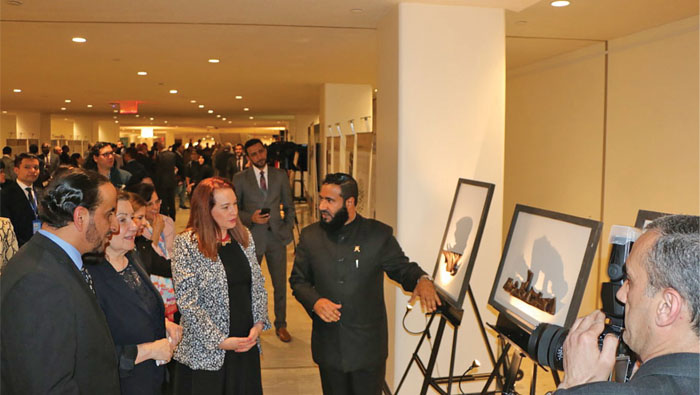 New York: The “Message of Islam from Oman” exhibition kicked off at the United Nations (UN) in New York and will continue until April 25, 2019.
The exhibition is organised by the Ministry of Awqaf and Religious Affairs, in cooperation with the Permanent Delegate of the Sultanate to the UN.
The event was presided over by Maria Espinosa Fernanda, President of the UN General Assembly, in the presence of UN dignitaries, permanent delegates, Arab and foreign ambassadors, heads of religious centres, Arab communities, interested parties, academics and a large number of US invitees.
Sheikh Khalifa bin Ali Al Harthy, Permanent Representative of the Sultanate to the UN, stressed the importance of organising the exhibition at the UN to promote values of peaceful coexistence and interfaith dialogue, as UN is an international organisation based on the same principles, especially after the recent rise in the level of hatred and terrorism in the world since the events of the September 11 attacks and the recent developments in New Zealand.
He said that the exhibition’s paintings and artistic and historical exhibits reflect the Sultanate, as well as sand painting, all of which are part of the noble global endeavour for the sake of man and the dissemination of the values of coexistence and peace, security and stability.
Mohammed bin Said Al Ma’amari, Scientific Advisor at the Office of the Minister of Awqaf and Religious Affairs, Supervisor General of the Exhibition “Message of Islam from Oman” affirmed that as the exhibition lands at the UN, it is another proof of the success of the Omani diplomacy and the international appreciation, which the Sultanate enjoys under the leadership of His Majesty Sultan Qaboos bin Said who laid the foundations of justice, equality, shared human values, Omani cultural heritage, trade and cultural openness, communication based on mutual interests, and a legal system that preserves rights and upholds human dignity.
Visitors to the exhibition expressed their happiness and appreciation over the exhibition of the Message of Islam from Oman at the UN. Maria Luiza Ribeiro, Chef de Cabinet to the UN Secretary General said it is a great exhibition that expressed the roots of religious tolerance and dialogue in Oman.
Syed Akbaruddin, Indian Permanent Representative at the UN, said: “We in India are fully aware of Oman’s special traditions of tolerance and it is a bridge of intercultural understanding”.
The exhibition included Omani fine art paintings, and calligraphy, in addition to displaying some Omani antiques and features of public life in the Sultanate in the past and present.
The exhibition also included international messages, a global media campaign aimed at spreading a culture of coexistence, peace, tolerance and harmony through the publication of cards expressing these values in social media and websites in different languages.