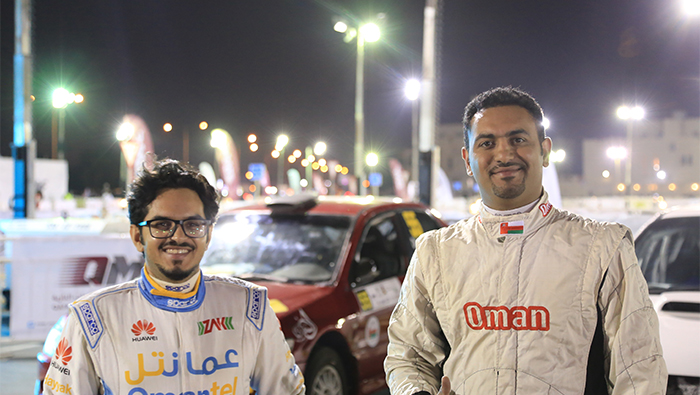 Muscat: Aiming to add more wins for Oman internationally and hoping to be on podium by end of this month, 3 Omani rally champions will participate in Jordan International Rally the second round of Middle East rally championship between April 25 and 27.
Zakaria Al Aufi and his navigator Amar Albalushi on Evo 9 who is the current champion of Oman rally championship hopes to find a place on top ranking drivers in this rally. Meanwhile Zakaria AlAmri with his co-driver Abdullah AlAmri on Subaru Impreza will take a part in this rally after finishing second in Qatar International rally last month on group “N” in Local division.
Abdullah Al Rawahi the young Omani driver with his Jordanian co-driver Atta Hammoud who won the second position in Jordan National Rally last month is confident to perform an excellent rally after his superb result and the young man is aiming to stand again on the podium in the International rally this time. After confirming his participation in the rally, Saif AlHarthi has again felt a problem in his car Evo 10 where he has cancelled the trip to Jordan cause of the reason.
The rally will consist 22 stages In three days as per the agenda from the organising committee, starting from the opening ceremony on Thursday 25 the of this month, having a special stage early second day of the rally and the remaining of the day , few stages will be conducted on Saturday with some stages at the Dead Sea area. Abdullah Al Rawahi the youngest among the 3 drivers has committed that he is going to learn more and more from each rally he attends and working with his Team and co-driver Hammoud to benefit from the nice terrain of Jordan stages to get maximum experience to help him for future. At the same time, he is looking forward to being at the podium if all things went will as planned by the technical team. Zakaria Al Aufi and Amar Albalushi on EVO 9 has stated that he is going to Jordan to compete and when a good position and will try his best to learn new things in this rally.
Al Aufi has experience in Jordan when he was the Navigator of Abdullah Al Rawahi last year, which will give him an extra advantage to close the gap with a faster driver who has stronger cars. He said, "I would like to thank all the effort and support from Oman Automobile association to make this happened to attend this event and thanks go to all supporters who do their best to help Oman talents. Meanwhile, this will be the first attempt to Zakaria Al Amri with his Navigator Abdullah Al Amri in Jordan Rally, this participation comes after his successful one last month in Qatar where he received the trophy of the second position in Local rally.
He commented, “I am happy to participate in Jordan where I look forward to gaining good experience and will work to be on the podium after finishing the rally, let’s hope successful rally for all the drivers and thanks goes to all including OAA for their extreme and wonderful backup and support for this participation."