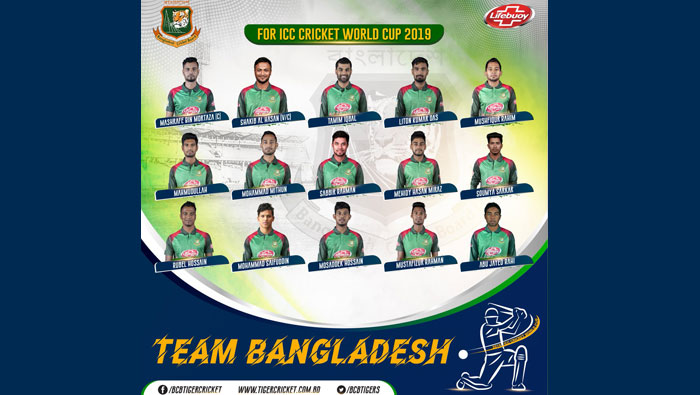 Dhaka: Bangladesh have announced their squad for the upcoming 2019 Cricket World Cup, and have sprung a few surprises with the final list of players.

Chief among them in the inclusion of Abu Jayed, their right-arm fast bowler who has yet to play a One Day International for the Tigers, but has represented his nation in five test matches.

He replaces Taskin Ahmed, who will not play for his country at the World Cup, nor will he represent them in an upcoming tri-nation series against Ireland and the West Indies that takes place before the World Cup.

Another inclusion that has surprised many is the presence of middle-order batsman Mosaddek Hossain, who last played for Bangladesh at the 2018 Asia Cup, and has unfortunately been dogged by a litany of poor performances since then.

His selection could have something to do with the fitness of Mahmudullah, who is still recovering from an existing shoulder injury, and has been included in the squad.

"Taskin played his last ODI in October 2017 and it was a long break for him. When we thought about him again for the New Zealand series he sustained an injury once again. According to the reports we have, he is not fit. He represented his domestic team in one match but his fitness is still not up to the mark," said Minhajul Abedin, the Bangladesh chief selector.

On Jayed's surprise selection, he said: "He can swing the ball and we felt that can add value to our bowling attack."

"Mossadek did well in recent domestic tournaments," said Abedin. "We want an all-rounder who can bowl off-spin. Mahmudullah has a shoulder injury, so he may not bowl over there. As a back-up spin all-rounder, we included Mossadek."

In addition, new recruits Nayeem Hassan and Yasir Ali will likely make their debuts in the tri-nation series against Ireland and the West Indies.

Bangladesh face Ireland and West Indies in a tri-series in Dublin, starting on 5 May and running for two weeks. They kick off their World Cup campaign on 2 June, against South Africa at the Oval.