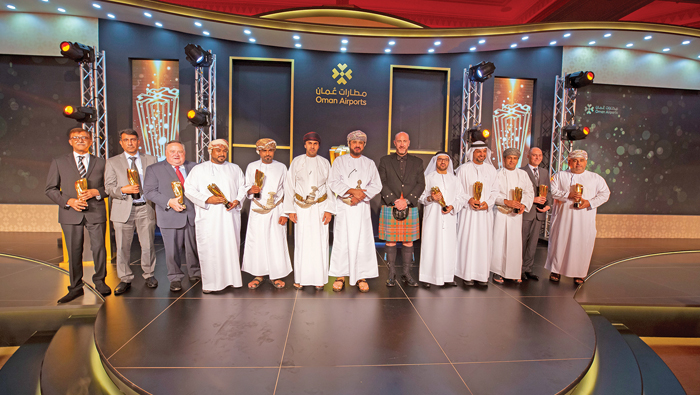 Muscat: Oman Airports held its third annual awards ceremony at Al Bustan Palace Hotel, where it honoured a number of airlines and retail outlets operating at Muscat International Airport, Salalah Airport and other regional airports.
The award ceremony ‘Oman Airports Award’ is considered to be the aviation sector’s biggest award. The event was hosted by of Sheikh Khalid bin Omar Al Marhoon, Minister of Civil Service.
The ceremony aims to be an incentive for competition among the companies to enhance their presence within Oman Airports so that the passengers travelling through these airports benefit from the best services and facilities. In the airlines awarding category, the top airlines were chosen for their rapid growth, development, excellent services they provide, as well as other standards.
Gulf Air won the longest operation GCC airline at MCT airport, Pakistan International Airlines won the longest operation Subcontinent airline and Egypt Air took the award in the African airline category. Oman Air won best promoting airline and partner of the year while both SalamAir and flydubai were rewarded as the fastest growing airline. Qatar Airways won the award for best route networking developing airline, Emirates Airline won best full-service carrier, and Air Arabia took the prize as the best low-cost carrier.
The outstanding retail companies and outlets at Oman Airports Award were chosen on their performance in areas such as food and beverage delivery, car service and retail service.
Europcar won the award for Excellence in car rental, Bank Dhofar won the award for leading banking partner and Aerotek won excellence in transit hotel.
Oman Airports honoured a number of outstanding staff for their innovative and humanitarian initiatives that contributed to the development of operational and management services in the companies.
A number of officials, dignitaries, representatives of government institutions in the civil aviation sector, representatives of airlines and retail stores operating at Oman airports were also present at the ceremony. The annual celebration highlights the importance that Oman airports attach to all operating institutions in the airports it supervises.