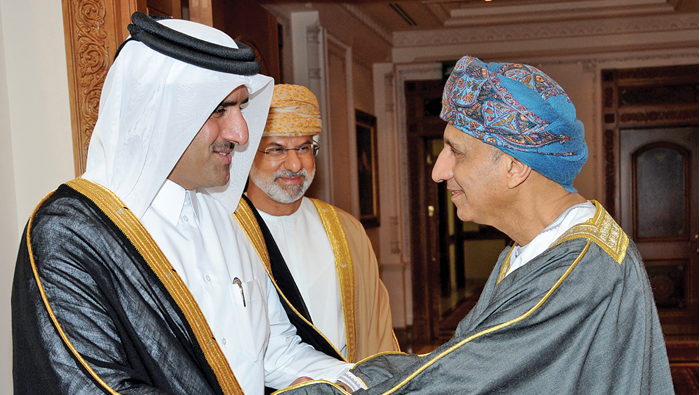 Muscat: His Highness Sayyid Fahd bin Mahmoud Al Said, Deputy Prime Minister for the Council of Ministers yesterday received Hamad bin Nasser Al Misnad, President of the Administrative Control and Transparency Authority and his accompanying delegation.
The guest conveyed greetings of the leadership of Qatar along with best wishes to His Majesty Sultan Qaboos bin Said. Sayyid Fahd reviewed cooperation between the two countries, as well as the joint keenness of both sides to promote such aspects.
He also highlighted progress of the State Financial and Administrative Audit Institution (SFAAI) in the Sultanate and the attention accorded by the Government to this institution as one of the sectors that effectively contributes to serving comprehensive development being witnessed by the Sultanate.
Conversation during the meeting touched on bilateral cooperation between the two countries.
On his turn, Hamad bin Nasser Al Misnad expressed his gratitude of this visit and the opportunity it provided to closely view the Omani experience in areas of financial and administrative control.
He commended the comprehensive progress being witnessed by Oman. He stressed the importance of the talks he conducted in the Sultanate, which come within the framework of enhancing ties between the two sides. The meeting was attended Sheikh Nasser bin Hilal Al Ma'awali, SFAAI Chairman and Ali Fahad Al Hajri, Ambassador of Qatar to the Sultanate.