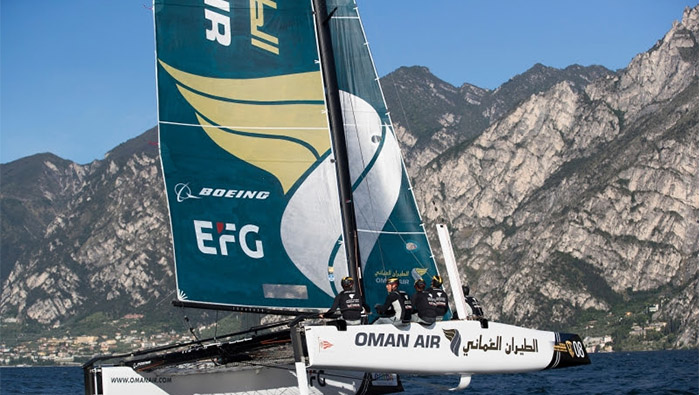 Muscat: Team Oman Air is returning to high-speed action this year after joining the international GC32 Racing Tour where they will compete against at least nine other teams in a series of high-profile events.
The team is based around the core crew which competed very successfully in the Extreme Sailing Series for many years, winning the title four times racing the foiling catamarans.
Oman Sail stalwarts Pete Greenhalgh and Nasser Al Mashari will again race with Kiwi Stewart Dodson and will be joined for the 2019 season by the renowned New Zealand helmsman Adam Minoprio and the experienced British sailor Adam Piggott.
“Arguably Adam is the most experienced helm out there,” said Greenhalgh, Team Oman Air’s project manager, tactician and mainsail trimmer. “In 15+ knots, he still stands out as noticeably the best. He will bring another element of consistency in the windy conditions.”
Minoprio was the youngest ever Match Racing World Champion when he won in 2000 and has since raced in the Volvo Ocean Race and America’s Cup challenges. In addition, the proven winner was at the helm of the Danish-flagged SAP Extreme Sailing Team when they won the Extreme series in 2017, and last year gave the Oman Air team a run for their money before finishing just behind them in third place. Piggott has raced with a number of GC32 teams, including Yacht Club de Monaco and the Red Bull Sailing Team in 2017.
This year will see all the leading GC32 teams racing together in a single series, a prospect which delights Greenhalgh. He said: “We are excited. There will be an increased element of quality racing, which definitely appeals. And we are excited about the venues in terms of the sailing conditions.”
Team Oman Air – which is also supported by EFG Private Bank Monaco – will begin their quest for the 2019 GC32 Racing Tour title at the season’s first event, the GC32 Villasimius Cup, taking place over 22-26 May in Villasimius on the south eastern tip of Sardinia. Further events are scheduled to be held in Lagos in Portugal, Palma, Lake Garda in Italy, and a further venue to be announced.
Throughout the season Team Oman Air will again benefit from the support of coach Marcus Lynch and the shore team of Hilal Zadjali and Max Richardson.
Details of the nine other teams taking part in the GC32 Racing Tour are due to be revealed in the near future.