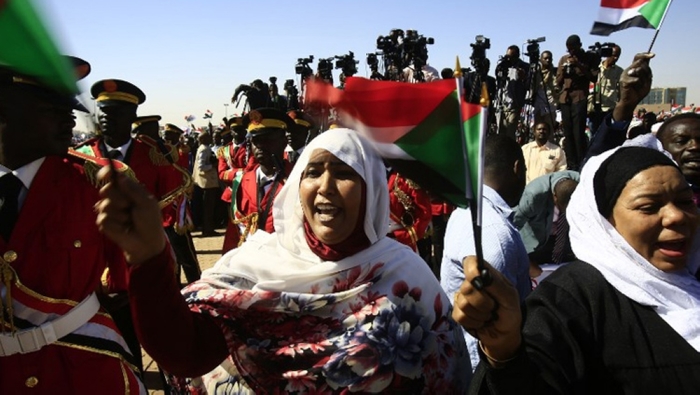 Khartoum: Around 20 people have been killed in attacks against anti-government protesters massed outside the army headquarters in Sudan's capital since their sit-in began, according to the leader of the country's main opposition party.

Sadiq al-Mahdi, chief of the National Umma Party said armed men in masks had been attacking people at the sit-in every morning since it began.

Thousands of protesters are gathered demanding that the military's top brass back them in demanding President Omar al-Bashir resignation.

Meanwhile, the country's interior minister stated that seven protesters had been killed and 15 injured, whilst 42 members of the security forces were injured.

In a statement, the 'Troika' comprising the UK, US, and Norway demanded the Sudanese government respond to the demand of protesters for a political transition.

Noting that protests had grown in intensity, the Troika said, "The time has come for the Sudanese authorities to respond to these popular demands in a serious and credible way. The Sudanese people are demanding a transition to a political system that is inclusive and has greater legitimacy.

"The Sudanese authorities must now respond and deliver a credible plan for political transition. Failing to do so risks causing greater instability. The Sudanese leadership has a grave responsibility to avoid such an outcome," the statement added.

The three countries called on Sudanese authorities "to release all political detainees, stop the use of violence against peaceful protesters, lift the state of emergency and allow for a credible political dialogue in a conducive environment with all key Sudanese actors that has as its basis the goal of a political and economic transition to a new type of Sudan.

"One where human rights, the rule of law, democracy and equal citizenship are all respected and which can bring an end to the conflicts and corruption that have plagued the country."

They added that if those steps were taken, that they would support the political process and help "resolve some of the long-term economic challenges that Sudan faces.

"This is a pivotal moment for the future of Sudan. The decisions the Sudanese authorities take now, in an inclusive dialogue, will have a dramatic impact on the lives of 40 million Sudanese people and the stability of the region. We urge the Sudanese authorities, as well as the opposition, to embrace their responsibilities," the statement concluded.