Half a billion dollar remittance drop as expats exit Oman 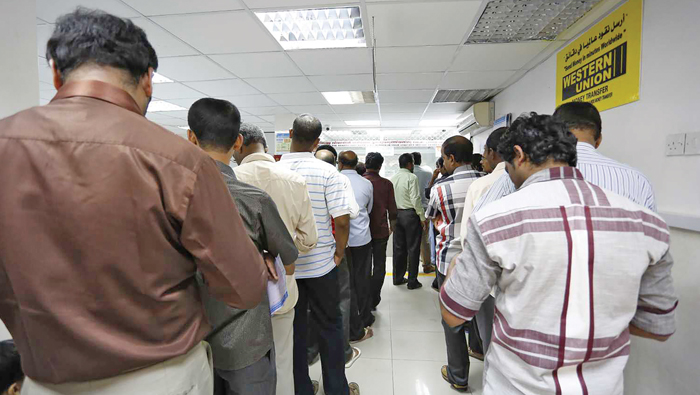 Muscat: The replacement of expatriate workers with locals from Oman’s workforce led to a decrease of more than half a billion dollars in remittances in 2017, a new report from the World Bank has said.
Compared to 2016, when $10.31 billion (OMR3.97 billion) was sent by expat workers in Oman to their friends and families back home, only $9.81 billion (OMR3.78 billion) was remitted in 2017, reflecting a decrease of $497 million, or OMR191 million.
Economists and financial analysts in the country say that they expect remittance figures to stay at this level for the foreseeable future, as the Sultanate continues to move ahead with its Omanisation policies and replaces expatriate workers with skilled nationals.
The report, titled Migration and Remittances – Recent Developments and Outlook for April 2019, said, “In the Gulf Cooperation Council countries, the deployment of workers from South Asia has been declining,” said the report. The largest remittance-sending countries are a mix of high-income countries from the Organisation for Economic Co-operation and Development (OECD), GCC countries, and large middle-income countries.
“Nationalisation policies in the GCC countries, particularly in Saudi Arabia, also saw shrinking job opportunities for South Asian migrants, as indicated by a drop in deployment from India (15 per cent), Pakistan (30 per cent), and Bangladesh (37 per cent),” added the report. “For 2019, it is projected that remittances to the region will slow to 4.3 per cent due to a moderation of growth in high-income economies and slower migration to the GCC countries.”
The United States was the largest sender of remittances in 2017, recording around $68 billion in outflows, followed by the United Arab Emirates ($44 billion) and Saudi Arabia ($36 billion). Remittance numbers across the Middle East and North Africa were $57 billion in 2017, $62 billion in 2018, and are projected to hit $64 billion in 2019 and $66 billion in 2020.
General Manager at Mustafa Sultan Exchange, PK Subudhi agreed that the decrease in the number of expat workers over the last few years was the main contributor to the fall in remittances.
“There is a downturn in the economy, and Oman has seen a decrease in the number of construction activities,” he said. “For example, the new airport project employed 11,000 workers, and now that the project has ended, they will go back home so there will be no remittances from them. Oman is a small market and these foreign workers going back will have an impact. Additionally, a number of high-earning, older employees have been replaced either by younger people who are willing to work for less, or by Omanis, so this also contributes to a drop off in remittances.
“Many companies are cutting costs at the moment, so higher earners are being gradually replaced, and I believe the remittance market will be sluggish and will stay at this level,” added Subudhi. “In terms of volumes, there could be a slight dip and it will not be as positive as it was in 2014 and 2015.”
In terms of India being the number one receiver of remittances, Subudhi said, “Indians are very attached to their base countries, to their families and homes. South Asians have a saving habit, so they would definitely like to take care of their families by sending money back home.”
India is the world’s largest recipient of remittances from around the world, receiving $78.6bn in 2018, followed by China ($67.4bn), Mexico ($35.7bn), the Philippines ($33.8bn), Egypt ($28.9bn), Nigeria ($24.3bn), Pakistan ($21bn), Vietnam ($15.9bn), Bangladesh ($15.5bn) and the Ukraine ($14.4bn).
According to the National Centre for Statistics and Information (NCSI), as of February 2019, the number of Indians in Oman was 657,153, a four percent drop compared to the previous year. There was also a 4.6 percent drop in the number of Bangladeshis (657,117) and a 7.1 percent drop in the number of Pakistanis (215,632), as compared to February 2018.
The report further added that the region saw a fall in migrant worker deployments due to lower demand from the GCC countries, especially Saudi Arabia. In India, the number of low-skilled workers seeking mandatory clearance for emigration dropped by 15 percent in 2018 (340,157) compared with 2017. In Pakistan, too, the number of emigrants dropped from a peak of 946,571 in 2015 to 496,286 in 2017, and fell again by 30 percent to 382,439 in 2018. The pace of migrant worker deployments from Bangladesh also declined by 37 percent from 1,008,525 in 2017 to 734,181 in 2018.