Personality of the Year award for CEO of Madayn 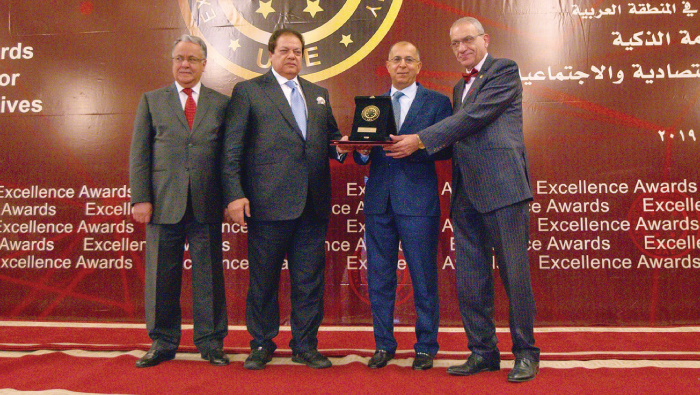 Muscat: The Council of Arab Economic Unity at the League of Arab States, in cooperation with Excellence Awards Academy, honoured recently Hilal bin Hamad Al Hasani, Chief Executive Officer of the Public Establishment for Industrial Estates – Madayn as the Personality of the Year in the field of industrial investment.
The awards ceremony was held in Cairo, Egypt under the patronage of Dr Hala El Said, Egypt’s Minister of Planning, Monitoring and Administrative Reform, and in the presence of Ambassador Mohammed Rabea, Secretary General of the Council of Arab Economic Unity, and a number of officials and businessmen representing various Arab countries.
A statement from the company said: “The Arab Economic Unity Council of the Arab League awarded the CEO of the Public Organisation for Industrial Estates - Madayn, Hilal bin Hamad Al Hassani, the ‘Personality of the Year Award for Industrial Investment’ in the Excellence Awards for Economic and Social Initiatives in the Arab Region.”
During the event, Hilal Al Hasani highlighted the vision of Madayn, which is to enhance Oman’s position as a leading regional centre of manufacturing, ICT, innovation and entrepreneurship excellence, and its mission to attract industrial investments and provide continued support, through regionally and globally competitive strategies, good infrastructure, value adding services, and easy governmental processes.
Objectives
He also outlined the objectives of Madayn which include attracting foreign investments to the Sultanate and localising the national capital, contributing to stimulating the private sector to achieve sustainable economic and social development, achieving environmental sustainability, and contributing to the creation of new job opportunities for national professionals.
Al Hasani also gave a brief on Madayn’s investment arm – Shumookh Investment and Services, which was established in 2010 to develop infrastructure projects and encourage investments in Madayn’s industrial cities.
The vision of Shumookh is to develop globally competitive infrastructure in the industrial cities which comprise Madayn and create the best environment for the growth of industries in Oman through the attraction of strategic investment partnerships and the implementation of diverse infrastructure development projects.
The award comes just a few days after Madayn officials met with the Public Authority for Civil Defence and Ambulance in Sohar to discuss safety procedures for industrial establishments in the North Batinah Governorate, and the National Business Centre’s plans to turn innovative ideas into stable commercial establishments.
“The Committee for Improving Services in Sohar Industrial Estate held a meeting with the Public Directorate of Civil Defence in order to discuss the requirements and legislations concerning the safety and security of the industrial establishments, the procedures related to the issuance of approvals and licenses in industrial facilities and field visits,” said Madayn.
The organisation further added, “The National Business Centre of the Public Authority for Industrial Estates organised a discussion session on ‘Transforming innovative projects into commercial products’. Participants in the session discussed a series of important topics such as the definition of innovative projects and the clarification of what they are, how the innovator can be an entrepreneur and what challenges the innovator faces to transform a product to commercial, as well as to publicise the most prominent supporters of innovation in the Sultanate and the mechanisms of support available.”