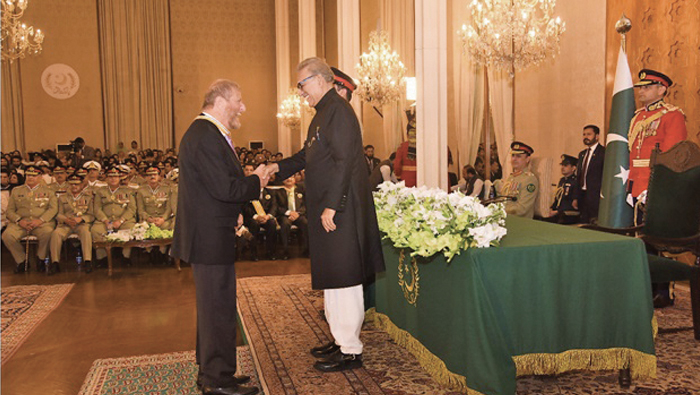 Muscat: Arif Alvi, the President of Pakistan, recently conferred the national award of Hilal-e-Imtiaz (Crescent of Distinction Medal) on GUTech's Founding Rector Professor Michael Jansen.
The medal, the second highest civilian award and honour given by the Government of Pakistan, was bestowed in recognition of his services to the discovery of the Indus Valley Civilisation, at the Presidency on Pakistan Day, March 23, in Islamabad.
The Professor, awarded a PhD (1979) for his paper, ‘Architecture of Indus Valley Civilisation’ was previously decorated with the ‘Sitara-e-Imtiaz’ (Star of Distinction), the third highest honour and civilian award in the State of Pakistan, in 1987.
He thus joins the exclusive group of persons with two national awards and the only one in the field of the Indus Valley which bears testimony to his lifelong, passionate services to Mohenjo Daro, the jewel of the third millennium Indus Valley Civilisation.
Shafqat Mahmood, the Minister of National History and Literary Heritage and Ambassador Aizaz Chaudhary, Director General of the Institute Strategic Studies Islamabad, received Prof. Jansen recently.
Gandhara civilisation
Prof. Jansen presented the outline of ‘Heritage Management Strategy’ which aims at establishing vertical and horizontal national structures and integrated regional networks to preserve and promote Pakistan’s deep and diverse heritage including the 5,000 year old ‘Indus Valley’ and 2,000 year old ‘Gandhara’ civilisation and glorious monuments of Hindu, Buddhist, Christian, Hindu and Sikh faiths.
Visiting Federal Minister for Religious Affairs and Interfaith Harmony Noor-ul-Haq Qadri and Omani Secretary of General Defence Muhammad Nasir Al Rasbi were assisted by Ali Javed, Ambassador of Pakistan to the Sultanate, at the recently held ‘Pakistan Day’ in Muscat, an unprecedented corporate event hosted in partnership with 16 local Pakistani businesses where the 500 guests witnessed the symbolic presentation of the Award to Prof. Jansen.