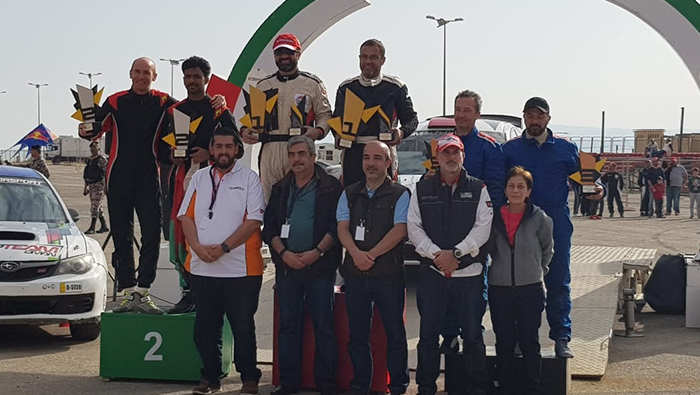 Muscat: Excellent performance during Jordan National rally has made Oman's young driver Abdullah Al Rawahi a hero. He reached the winning podium as first in group N and second overall with his Jordanian Navigator Atta Hammoud on Subaru Impreza N14.
The rally was conducted near the Dead Sea and the surrounding area which was distributed to 8 stages in Baptism for about 12 km, the Dead Sea for about 2.5 km and in Main for total 17 kilometres. Oman's latest rally champion Abdullah Al Rawahi showed good pace and talent during this rally when he led the first stage with a difference of 11 seconds over the race winner Maroof Abu Samra and the other Jordanian driver Khalid Juma.
During the second stage in the Dead Sea, the shortest in this rally for 2.5 kilometres, Abdullah came third but he was still leading the race. Stage 3 in Main was the longest for nearly 17 kilometres where the Omani young driver finished ahead of the champion Abu Samra for about 12 seconds. After finishing the rally by end of stage 8, the difference between the winner of the race and the second place holder was just 28 seconds, which means that the competition was brutal between Abdullah and Abu Samra.
Al Rawahi after the podium finish and winning the first place in group N and second position overall said, "I am very happy with this result and appreciate the support from my navigator Atta Hammoud during this rally. It is clear to all that I am learning from every rally I am attending." He added, “The rally was not new for me as I attend Jordan rally last year but this was strong competition and I am glad to end at this position and thanks goes to everyone for this success.”