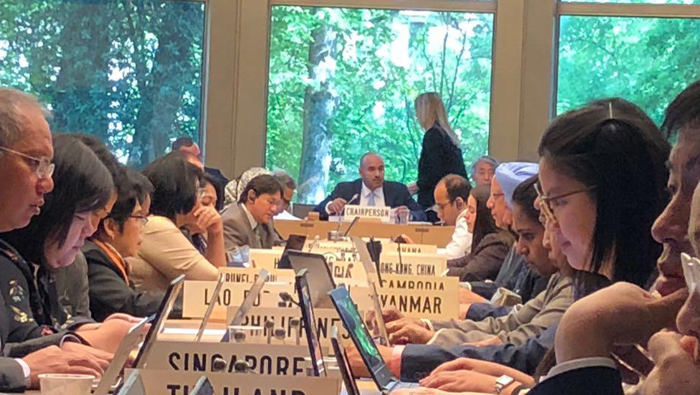 Muscat: The Sultanate of Oman is one of the countries which are actively participating in fisheries support negotiations at the World Trade Organisation (WTO) in Geneva. The organisation uses the expertise of one of representatives of the Sultanate in Geneva.
Faisal bin Saud Al Nabhani, an advisor at the Sultanate's WTO Office, has been appointed by the member countries to bring the points of views and negotiating positions closer on a number of issues for negotiations. These issues include the subjects regarding the support for artisanal fishing, settlement of disputes, notifications as well as special and differential treatment.
The Ministry of Commerce and Industry, through its representatives at the Sultanate’s office at WTO, is defending the interest of the country in the subjects opened for discussion.
The Sultanate, in its capacity as president, is coordinating the positions of the Gulf Cooperation Council (GCC) countries in the Technical Working Group on Fisheries Support Negotiations at the WTO headquarters in Geneva.
The negotiations aim to reach to a multilateral agreement with the WTO to regulate the forms of subsidies provided by states for fisheries to achieve sustainable development goal of the United Nations 2030 which was agreed upon by the member countries in 2015. This is meant for controlling harmful impacts to support fisheries stocks around the world.
Al Nabahani said that the negotiations were important because they would make member countries abide by the legal obligations for reducing the forms and quantity of the support provided to the fisheries sector, which is expected to affect the possibilities of countries developing their fisheries sector.
Faisal Al Nabhani said: "Fisheries sector is one of the most important sectors in the world which ensures food and employment. Fish covers about 25 per cent of the world's protein needs. This is in addition to providing employment to more than 200 million people in the world who work in this vital sector directly or indirectly.”
The fisheries sector is one of the five sectors targeted in the ninth five-year plan as part of the government's efforts to diversify sources of income, he said.
Faisal Al Nabhani said that the fisheries sector of the Sultanate accommodated tens of thousands of fishermen as well as workers of fisheries establishments.
He stressed that the Ministry of Agriculture and Fisheries wanted to increase the share of fishing in the gross domestic product (GDP) to OMR730 million. It is important that the outcome of the negotiations does not affect the Sultanate's capabilities to develop this vital sector, its plans and programmes to provide job opportunities and raise the contribution of the fisheries sector to the GDP. It is also important to take into account the indirect effects of negotiations, particularly on the idea of sovereignty of states over their territorial waters and their resources, as well as on the rights of the states in the light of the Convention on Subsidies and Countervailing Measures.
The negotiations would be held on May 6, June 10 and July 8 this year. They would be participated by the negotiators and experts of fisheries from various countries.
Faisal Al Nabhani said: The coming negotiations would be open as per the plans of meetings. The four facilitators elected by the member states would make progress in the negotiations. Their tasks include holding negotiations on the subjects given to them. They would be joined by the delegations of member states to discuss new draft to reach to consensus, provide solutions for bridging gap, reviewing finished works, achievements in the negotiations with the member states.