OTA provides opportunities for juniors to prove their capabilities 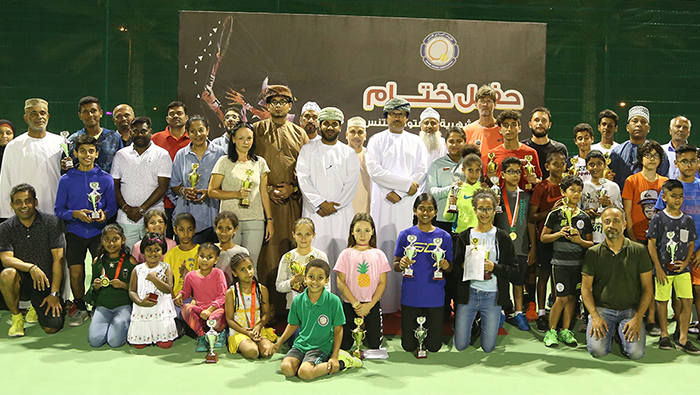 Muscat: The Oman Tennis Association (OTA) organised its second tournament from March 14 to the 23, 2019 at the Sultan Qaboos Sports Complex. The purpose of this event was to help develop tennis as a sport in Oman and give opportunities for juniors to prove their capabilities.
In addition to this, the Oman Tennis Association added new categories for women’s and men’s events to give them an opportunity to play the sport. There were approximately 115 participants joining the event with the categories of 7 and under (mini tennis), under 10, under 12, under 14, under 16 & under 18 boys and girls. In addition, new categories of men’s and women’s singles and doubles were included where the top 2 from each category were awarded by the guest of honor Mundhir bin Taglib Al Barwani, the general secretary of Oman Tennis Association and Salman Al Balushi, the Executive Manager of Oman Tennis Association.
The final of the U-18 boys was played between Muneer Al Rawahi and Thomas Dupont in which Muneer won the match with the score of 7-6, 6-0. In the under 18 girls, the final was played between Saffanah Al Riyami and Kaavya Jayakumar where Saffanah won 6-4, 7-5.