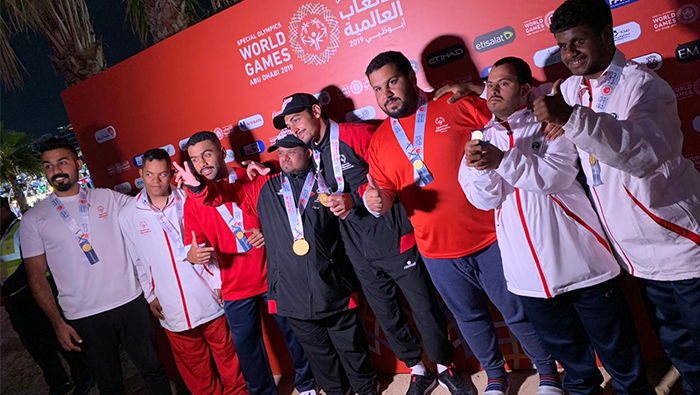 Muscat: An Oman Special Olympics sailing team member is celebrating gold medal success at the Middle East’s first ever World Games event in Abu Dhabi.
Mohamed Ahmed Al Wahaibi won his class in the solo Laser Radial event at the high- profile international games which attracted 7,500 athletes from no fewer than 190 countries. The 24-year-old gold medal winner was part of a six-strong Omani sailing team supported by instructors from Oman Sail schools and coaches.
A full-time employee at Oman International Group, Mohammed began sailing in Oman Sail Al Mouj Sailing School on October 2018. “Mohamed is a strong guy and he has worked hard and trained hard for over a year to get the medal – we are going to continue working with him and develop his abilities,” said the Oman team’s leader Ali Al Shuhaimi. “It was the first time we have had an Oman sailing team at the Special Olympics and it has been a good experience for everyone who was involved, both the athletes and the coaches.”
Also racing in the single-person Laser Radial class were Sufuat Ahmed Al Kharusi, 25, and Muhana Salim Al Manji, 22, who finished in fourth and fifth place respectively. The youngest member of the Omani team was 17-year-old Abdullah Saleh Al Ruqaishi, who raced in the two-person Bahia class accompanied by sailing instructor Saleh Al Raisi from Muscat’s Marina Bandar Al Rowdha Sailing School. Also in the Bahia fleet were Mahmood Hamood Al Hasni, 25, and Samir Sulaiman Al Harthi, 19, who raced with Al Mouj school instructors Abdullaziz Al Sabahi and Ghassan Al Zadjali.
“The Special Olympics World Games is a good start and the team did a good job. When we get back to Oman, we will develop a clear plan for the future,” Al Shuhaimi, who also worked as Assistant Technical Director Delegate during the sailing event. “I need to thank everyone who has been part of this project, and also the organisers of the games. “For the Bahia sailors, it was their first time, but it was a great experience and we can work more with them,” he added. “We have now got the experience to build on for the next Games in Germany in 2023. In between now and then we will also work with teams from other countries who have more experience in this kind of sailing.”
Overall, Oman sent 93 athletes to the Games who competed across 14 sports and winning no fewer than 47 medals, 12 of them Gold. Oman Sail played an active role in the Games, with Ahmed Al Qasmi, Nawaf Al Ghadani, Sameer Al Battashi and Faisal Al Qaitaiti being part of the race management, and Ali Ambousaidi from Oman Sail’s Corporate and Personal Development department as a member of the Game’s jury.