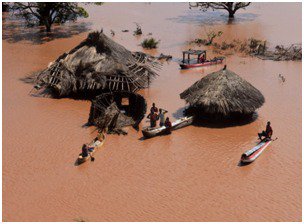 Three Indian naval ships are currently undertaking providing humanitarian assistance in coordination at the request of the government of Mozambique.

According to the Ministry of External Affairs, the three ships are the INS Sujatha, INS Shardul and INS Sarathi. They were diverted to the port city of Beira to " provide relief material in the form of food, clothes and medicine to the affected people. In addition, the ships have three medical practitioners and three nurses to provide immediate medical help."

According to the International Red Cross, "90 per cent” of Beira and the surrounding area has been damaged or destroyed.

Jamie LeSueur, who is leading the International Federation of Red Cross and Red Cresent Societies (IFRC) assessment team in Beira, said, "The situation is terrible. The scale of devastation is enormous. It seems that 90 per cent of the area is completely destroyed.”

The government of Mozambique has delcared a national emergency as the death toll rises above 242. Authorities expect that figure to exceed 1,000.

The cyclone also caused severe damage in Zimbawbe and Malawi.