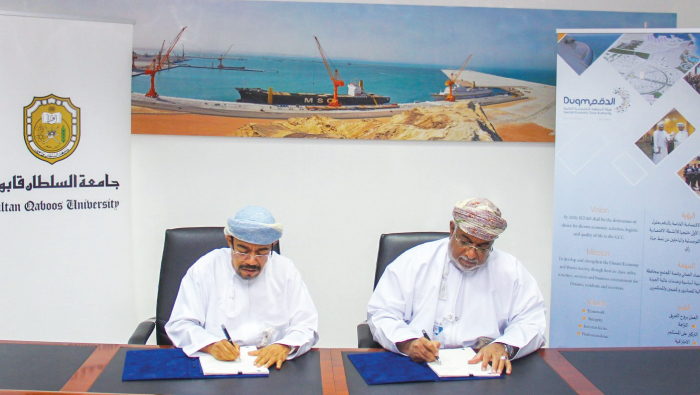 Muscat: Sultan Qaboos University (SQU) is set to establish research centres in Duqm which will focus on marine biology, renewable energy and earthquakes, at a cost of OMR 1 million
On 21 March 2019, the Special Economic Zone Authority in Duqm (SEZAD) signed an agreement with Sultan Qaboos University (SQU) which will allow SQU to use the land in SEZAD to establish research centres in a number of fields.
The signatory on part of SEZAD was Yahya bin Said Al Jabri, Chairperson of SEZAD Board, while Dr. Ali bin Saud Al Bimani, SQU Chancellor, signed it on behalf of SQU.
SEZAD provides land
Under the agreement, SEZAD will allocate 20,000 square metres of land to the project.
The estimated cost of the project, which is expected to be underway in 2020 and start operations in 2022, will be about OMR 1 million.
It will provide 50 job opportunities in the first phase and increase in subsequent years with the increase in research projects implemented in Duqm.
It will be of interest to academics, students, scientists and researchers while private and public sector institutions are expected to benefit from the research and result obtained.
SQU will set up research centres in the areas of marine life, marine navigation, disasters and earthquakes, cultural, social, economic and industrial studies, renewable energy, telecommunications and remote sensing.