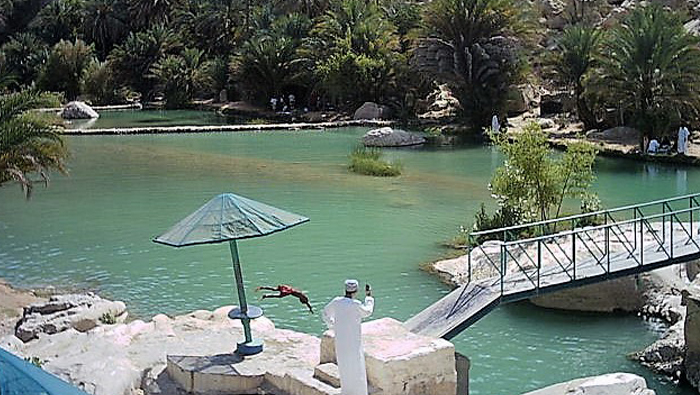 Wadi Bani Khalid: Wilayat Wadi Bani Khalid in the Governorate of North A’Sharqiyah is one of the wilayats that has various components of nature tourism in several places, including the water ponds, “Maqil Cave and Village, Hawar Natural park, Al Ouwaina Fort, the golden sand in Rumail and Qusaira Villages and other tourist places. 187,107 tourists, from inside and outside the Sultanate, visited Wadi Bani Khalid in 2018. Wadi Bani Khalid is known for its mild climate in summer and cold climate in winter. It is affected by Al Khareef season in August. It is a mountainous and desert Wilayat at the same time and this contributes to the constant activity of tourist traffic throughout the year.
Banu Khalid
According to Isaaf Al Ayan in Ansab of Ahil Oman by Sheikh Salim bin Hamoud Al Siyabi, the Wilayat is named because Banu Khalid settled here in the eastern part of Oman and named after them, like in the cases of Wadi Bani Rawaha , Wadi Al Jahour, Wadi Bani Ghafir.
Wilayat Wadi Bani Khalid can be reached through a paved road linking it with the rest of the governorates and wilayats. It is about 220km away from the Governorate of Muscat, via the east road and 300km through the coastal road of Quriyat-Sur.
Natural tourist places
Wilayat Wadi Bani Khalid hosts various natural tourist places and weather that attract tourists and residents in the Wilaya in any season, but the peak in winter time, as well as in the season of public holidays, where visitors come from different places.
“The total number of tourists who visited the Wilaya last year reached 187, 107,” said Talal bin Khalfan Al Shuaibi, Director of Tourism Department in the Governorate of North A’Sharqiyah.
“Wilayat Wadi Bani Khalid is experiencing a tourist influx by visitors from inside and outside the Sultanate. The number of visitors from the Gulf Cooperation Council and the Arab countries was 4,991, constituting 2.7 per cent, while the Asian and African residents in the Sultanate reached 48,282 tourists, representing 25.8 per cent and 77,074 from European countries, constituting by 41.2 per cent,” he added.
Al Shuaibi told Oman News Agency (ONA): The total number of tourists in 2018 to Wilayat Wadi Bani Khalid witnessed a steady increase of 24.4 per cent compared to 2017, which amounted to 182,648 tourists.
The Director of Tourism Department in the Governorate of North A’Sharqiyah said that a tourist facility is being built at the top of the water ponds to serve tourists and residents and those wishing to spend time in nature, and there is a rescue team in the ponds in order to look after tourists, especially those wishing to swim, in addition to a team of statistics and organization of traffic at the tourist site, praising the efforts of the Royal Oman Police, the Wadi Bani Khalid Municipality, tourist workers and citizens who receive visitors in the tourist village of Maqil .
It is worth mentioning that Wadi Bani Khalid has many tourist sites, such as the park and waterfalls of “Hawar” in the village of Bidhaa, “Ein Al Sarouj” in the village of Al Adifin, “ Al Adifin Fort “ , Al Ouwaina Mosque Fort, which was a centre of the Wali as the Mihrab of the mosque was transferred to the National Museum. The Wilayat of Wadi Bani Khalid is also known for the water ponds like Maqil cave and Village, where water pools are the first destination for visitors to the Wilaya and other places of tourist attractions.