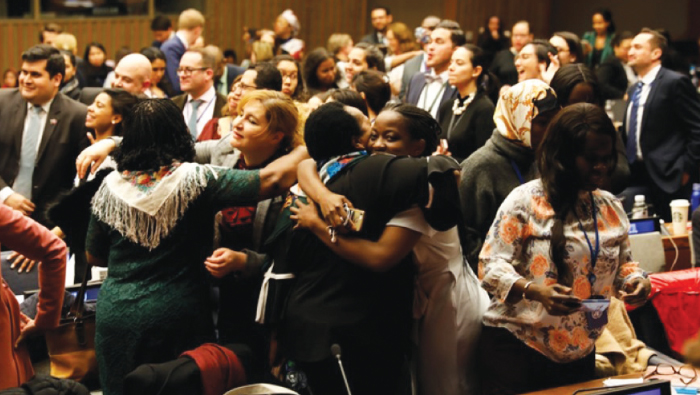 New York: The United Nations Commission on the Status of Women (UNCSW) despite the US opposition endorsed an Iranian delegation’s proposal and urged world powers to avoid illegal unilateral action against developing countries.
United Nations calls for avoiding unilateral action against developing states The United Nations Commission on the Status of Women in its final statement released on March 22, rejected any economic, financial and trade measure which is imposed upon the developing countries contrary with the UN charter and international law.
In spite of the US and the EU opposition, Iran’s offer for adding this section to the final statement was approved. Cuba, China, Pakistan, Nicaragua and African countries supported Iran’s offer which rejects unilateral action against developing states.
Participants of the 63rd session of the UN Commission on the Status of Women adopted agreed conclusions and delivered a roadmap that ensures women’s social protection, mobility, safety, and access to economic opportunities.
During the Commission’s annual two-week session, representatives of UN member states, civil society organizations and United Nations entities gathered at UN headquarters in New York.
They discussed progress and gaps in the implementation of the 1995 Beijing Declaration and Platform for Action, the key global policy document on gender equality, and the 23rd special session of the General Assembly held in 2000 (Beijing+5), as well as emerging issues that affect gender equality and the empowerment of women.
Member states agreed on further actions to accelerate progress and promote women’s enjoyment of their rights in political, economic and social fields.