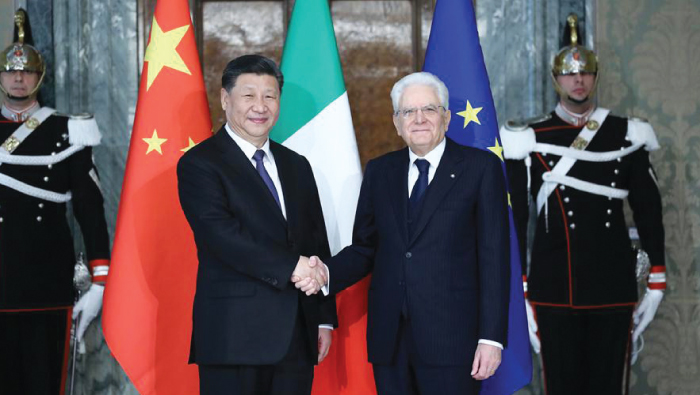 Rome: Chinese President Xi Jinping and his Italian counterpart, Sergio Mattarella, held talks here Friday, and agreed to jointly push for greater development of the China-Italy comprehensive strategic partnership in the new era.
The two heads of state agreed to guide the direction of bilateral ties from a strategic height and long-term perspective. During their talks, Xi noted that both as countries with an ancient civilization, China and Italy have profound historical relations.
This year marks the 15th anniversary of the China-Italy comprehensive strategic partnership, and the two countries will celebrate the 50th anniversary of their diplomatic relations next year, Xi said.
He recalled that for nearly half a century, China and Italy have respected, trusted and helped each other, enhanced high-level exchanges and strategic mutual trust, facilitated communication, cooperation and convergence of interests, and deepened mutual understanding and traditional friendship.
As the world is undergoing profound changes unseen in a century, China is willing to carry forward the spirit of cooperation with the Italian side, strengthen strategic communication, encourage the international community to seek common ground while reserving differences and promote development through cooperation, so as to contribute new wisdom and strength to building a better world, Xi said.
China stands ready to join hands with Italy to firmly keep the direction of bilateral relations in the new era, carry out closer high-level exchanges and upgrade the quality and level of bilateral practical cooperation, he said.
Xi said he agrees with Mattarella that Italy and China should be partners with inclusive interests and common development, adding that China is willing to enhance the comprehensive strategic partnership with Italy. The two sides need to strengthen communication on visions, consolidate political mutual trust, continue to extend mutual understanding and support on issues of each other’s core interests and major concerns, and strengthen communication and cooperation between their governments, legislative bodies and political parties, Xi said.
He encouraged the two sides to create highlights in bilateral cooperation, jointly build the Belt and Road, and promote the synergy of their development strategies and the planning of practical cooperation.
China is willing to import more high-quality products from Italy and encourage more capable Chinese enterprises to invest and start business in Italy, Xi said.
He also urged the two countries to boost cultural and people-to-people exchanges, and enhance communication and cooperation in such fields as culture, education, film and television, and media, so as to consolidate the popular support for friendship between the two peoples.
On China-Europe relations, Xi said his country has always supported the European integration and respected the European Union’s efforts in solving its problems. Xi said he hopes that Italy will continue playing a positive role in promoting EU-China partnership for peace, growth, reform and civilization, Xi said.